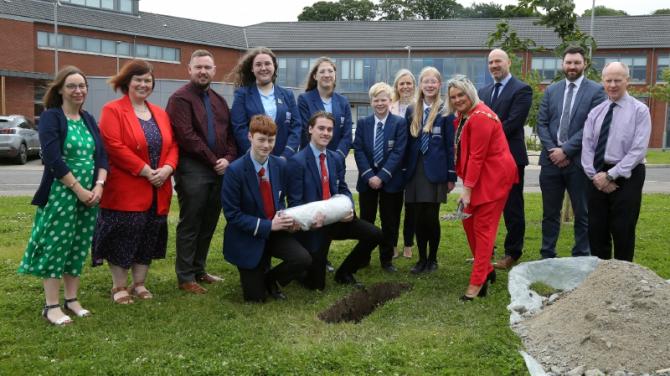 PUPILS at Strabane Academy have locked away their school memorabilia in a time capsule to be unearthed by generations to come.

Over recent months, pupils and staff at the school have been busy collecting items to put into the capsule, which also marks the Queen's Platinum Jubilee.

The capsule was buried on the school's Derry Road grounds besie the recently planted Jubilee tree with the assistance of Mayor of Derry City and Strabane District Council, councillor Sandra Duffy.

The silver container, to be uncovered in 50 years' time, contains various items giving future generations a glimpse of what school life was like in 2022.

Included within the time capsule is a letter from current principal, David Hampton, to the future principal as well as letters from Head Boy and Head Girl, Patick Walker and Joanna McCombe.

A 2022 school prospectus and exam papers across a number of subjects are also included, alongside a USB containing videos of the school used for open nights.

A school spokesperson said: "We hope this time capsule will be opened in 50 years and includes many items for future generations to hear about our school in 2022."

Thanks was also extended to Mayor Duffy for attending the event.

Mayor Duffy was treated to a tour of the new multi-million pound school campus following the burial, with pupils - and staff - were delighted to be able to try on the mayoral chain of office.

"Thank you to all at Strabane Academy for inviting me to the burial of their time capsule to mark the Queen's Platinum Jubilee," the Mayor said.

"Some fabulous artefacts that will be fascinating for those who uncover them in years to come."