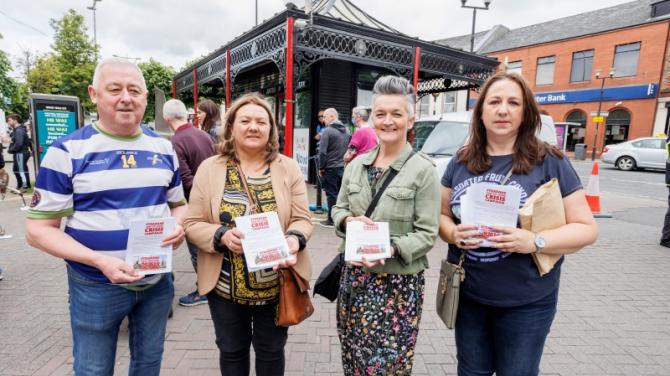 CAMPAIGNERS from Strabane will travel this weekend to a major day of action on the cost of living crisis.

Saturday's rally at Stormont comes on the back of localised action in towns and cities across the province, in conjunction with major protests in London and Dublin, when thousands of families, community groups, volunteers, political representatives, workers and trade unions took to the streets in the fightback against the escalating crisis.

The protests are demanding a range of immediate measures to tackle the crippling impact of rising bills on already hard pressed families and individuals.

Over the course of the weekend, campaigners garnered hundreds of signatures in support of the campaign demands, while scores of leaflets were also handed out to raise awareness of the its objectives.

As the campaign progresses, more localised demonstrations could be organised as campaigners say "feet on the ground" is the only way to combat the crisis.

Last Tuesday evening, a broad base of around 25 people including representatives across the political and civic spectrum came together for the Strabane Cost of Living Crisis Campaign's virtual inaugural meeting.

Described by a campaign spokesperson as "very positive", a number of actions, both short-term and long-term, emanated from the meeting.

"Many thanks to all who attended the initial organising meeting," the spokesperson said.

"A great turnout from a broad base of political reps and activists, community campaigners and concerned individuals from all across Strabane showing their support for the campaign and contributing to very honest and open discussions.

"Many great ideas, suggestions, proposals and commitments were put forward.

"Initial actions will focus on encouraging those most affected by the crisis are heard and mobilised to make demands for urgent action.

"Volunteers to help grow the campaign are always welcome."

A working group is to be established in the coming days.

The spokesperson continued: "Strabane has suffered more than most as a result of deprivation, and there are many campaign groups similar to ours which have also been set-up in Belfast, Derry, Coleraine, Enniskillen and Omagh and all will be represented at Saturday's rally.

"We have been out and about distributing leaflets to highlight the campaign, while we also had a stall on Friday where we had a sign-up sheet to support the Cost of Living Campaign and again, we had so much support.

"A lot of people were interested in finding out about the campaign and a lot of people also shared their worries and concerns about things getting worse.

"We also have a Facebook campaign and it's been really positive to see people getting behind it and supporting the demands."

This weekend's rally at Stormont is organised by the Irish Congress of Trade Unions and backed by the Cost of Living Crisis Campaign and many others.

"We are urging as many as people to come along on Saturday to have their voices heard and to make as much noise as possible," the spokesperson continued.

"There is a broad base of people coming together and we in the Strabane Cost of Living Crisis Campaign, will be there on Saturday.

"There is a need for people to mobilise to combat this cost of living for ordinary people. People have asked 'who is this campaign aimed at' and it's aimed at whoever needs to hear it, whether it's Stormont, Westminster, the utility companies, the big multi-nationals or employers.

"If we make enough noise, they are going to hear it and will have to listen.

"Food bills are going to be astronomical and bills are ever increasing. The time for action is now, it's time for feet on the streets."

For further details and for anyone wishing to get involved with the campaign, they should email: strabanecostoflivingcampaign@gmail.com

The campaign demands and to sign the Cost of Living Crisis Campaign statement is available by logging on to: