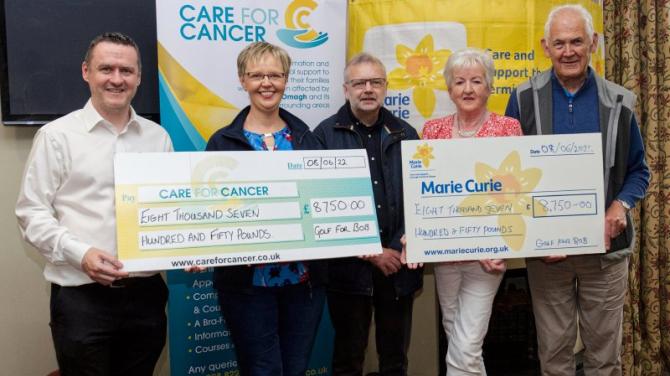 A FUNDRAISER in memory of a well-known Castlederg man has raised thousands of pounds for two cancer charities.

Organised by Bob’s son Martin and his sister, Bernie, it had been hoped the tournament on May 20 would raise over £10,000.

The grand tally has more than surpassed that with an amazing £17,500 raised.

All proceeds are going to Strabane Marie Curie Support Group and Care for Cancer, based in Omagh, both of which helped Bob following his diagnosis of prostate cancer.

Both charities provide nursing care and practical support to those who need it in the North West.

Speaking ahead of the event last month, Martin said it was the family's way of saying ‘thank you’ to the charities.

"Six years ago my father contracted prostate cancer which then spread to his bones," he said.

"The doctors advised that he may survive up to two years but thanks to clinical trials he underwent to try and prolong his life, we ended up having five years with him instead.

"Something for which we’ll forever be grateful.”

A man who was held in exceedingly high regard, Bob was well-known in not only Castlederg but Newtownstewart and Strabane.

A popular figure in the area, he was involved with the youth clubs and the Credit Union and was a dedicated family man.

He also worked in the Adria factory in Strabane until its closure before moving on to McNamee’s and then McDermotts hardware stores where he kept working up until only a few months before his passing.

A fan of whist and a member of Derry’s Operatic Society, Bob's major love was golf.

He could frequently be seen getting in a round in Newtownstewart where he became club captain, then vice-president before stepping down, and it was this love of the game which was the inspiration for the golf tournament.

When the tournament was announced, there was a deluge of sponsorhip wth locals and businesses all keen to lend their support.

One of those was none other than Castlederg’s own Liverpool FC starlet, Conor Bradley, who had a framed shirt sent over.

At the time, Bernie said the support was "humbling" and showed the high esteem Bob was held in.

"The sheer generosity of everyone can’t be quantified, it’s incredible," she added.

"If we can help just one person with the money raised, then that’s all we want.”

Speaking of the event's success, a spokesperson for the charities said the funds will go a long way to sustaining their services.

"Thanks must go to Mrs Bernie McGirr who put this special event together with the help of family members and relatives," the spokesperson said.

"A vote of thanks also goes to the many sponsors for their massive support in covering prizes and expenses.

"We cannot forget the many teams of golfers from Newtownstewart and surrounding golf clubs who participated in the event.

"A very special thanks to Newtownstewart Golf Club Council for making the course available for the occasion. Thank you to all who contributed in any way.

"Both charities are most appreciative of this amazing donation.

"It will go a long way in helping with twenty-four seven hands-on nursing care, support and expert advice where needed for those with cancer and terminal illness, as well as respite for their families."