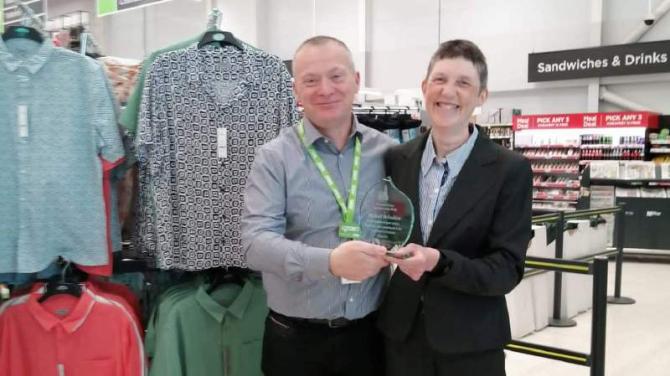 THE long-serving manager of a local supermarket has been honoured with a special award from Derry City and Strabane District Council.

Michael McFadden retired from the position he has held with Asda Strabane for several years on Friday.

The recognition came at the request of customer, Dr Iona Hamilton, who had contacted council and highlight that his time of service deserved to be recognised.

Mayor Sandra Duffy had been due to visit the Branch Road store to present Mr McFadden with a special plaque but due to time constraints, she was unable to attend before Michael finished his final shift.

Council ensured the personalised plaque was delivered to the store where Dr Hamilton was able to make the special presentation and paid tribute to Mr McFadden's "admirable service".

"His time in the ASDA Strabane store has not been without challenges, in particular, with the COVID pandemic," she said.

"It is both wonderful and fitting that the new Mayor, councillor Duffy, has recognised Michael's devoted service to Strabane of several years.

"Michael has worked quietly at the chalk face. He has been frequently on the shop floor, where he has engaged with all tasks and dealt knowledgeably with customer enquiries.

"His personal concern for both his staff and customers alike have been translated into his being approachable and sympathetic to all concerns.

"He is such a personable character and his engaged approach and caring attitude hand meant that people feel valued.

"Michael has been at the helm, with a highly skilled, knowledgeable and respected team at his disposal."

She added: "The ASDA staff are second to none and their success is a testimony to his strong leadership.

"Under Michael's direction, the staff have faithfully served the people of Strabane throughout lockdown, untiringly and selflessly.

"Embracing the restrictions, they provided a first-class service due to their earnestness and generosity of spirit.

"Michael facilitated their efforts in his leadership as a diligent and capable manager. His efforts rightly deserve to be acknowledged."

Dr Hamilton said she was honoured to present Michael with the token of recognition from the Mayor.