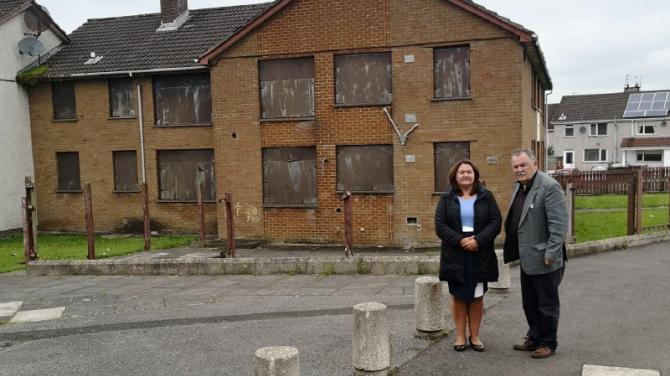 WORK to upgrade a derelict block of flats in Strabane, described as an “eyesore” by local residents, is to begin in early next year.

Plans are in the pipeline to refurbish the long-dormant flat block in Lisnafin Park into six self-contained housing units.

The work includes the installation of ‘assistive technology’, disability access as well as a substantial revamp of the exterior and interior of the building.

The state of the flats, which are boarded up, has long been a complaint among locals living in the area.

The flat block has lain dormant for almost a decade and has been a magnet for anti-social behaviour in the past with repeated calls from the local community and politicians for the Housing Executive to take action.

West Tyrone Sinn Féin MLA., Maolíosa McHugh, had written to Communities Minister, Deirdre Hargey, about delays in the commencement of the scheme.

A reply issued by Paul Price, director of Social Housing Policy and Oversight within the Department for Communities (DfC), stated that the refurbishment is scheduled to begin in early 2023.

Mr Price said he had written to the Housing Executive who stated they "remain committed" to undertaking the "extensive refurbishment scheme of Block 330 A-F.

He added: "This is an innovative project that will involve a mix of ground and air source heat pumps and solar power, which will benefit both the future tenants in terms of lower energy costs and the environment with respect to reducing carbon emissions.

"It is also intended to include an element of assistive technology subject to the needs of the tenants. Consequently the scheme has taken some time to properly develop.

The scheme will also see the introduction of a Local Lettings Policy to direct allocations to applicants over 55 years of age.

Welcoming the update, Maolíosa McHugh said: "Mr Price confirmed that the Housing Executive will be submitting Planning and Building Control applications in the next two months and are preparing for the tender process that will follow and that subject to these being successful the anticipated start date on site is early 2023.”

“Local residents have been expressing concern of the slippage in the initial timescale envisaged for the commencement of this scheme. This update is timely," she said.

“In an area with such a high need and demand for social housing it has been a crying shame that these flats have remained derelict and unoccupied for such a long time."