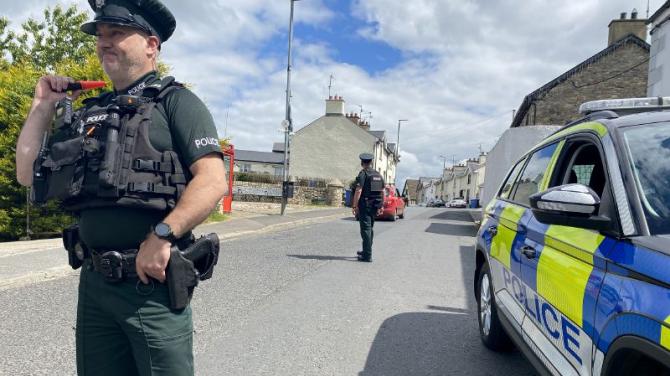 POLICE have pledged to crackdown on hauliers who are breaching the HGV restriction in Clady.

Officers from Derg Neighbourhood Team were in the village on Wednesday conducting a road safety operation.

Assisted by colleagues from Roads Policing Unit in Maydown, they were particularly keen to ensure compliance with the legislation prohibiting vehicles exceeding 7.5 tonnes from travelling through the border village.

Under the order, vehicles are exempted from the restriction in certain circumstances such as HGVs making local deliveries or travelling to and from local businesses, however locals say a number of haulage drivers are still flouting the ban.

During Wednesday's operation, one lorry driver was stopped and a £30 Fixed Penalty Notice was issued.

Two other lorry drivers were spoken to, with further enquiries to be conducted.

Constable Brown said: "While it seems many HGV drivers are adhering to the new legislation, some are not.

"We’ve listened to the concerns of residents who told us of the impact large goods vehicles were having, and of concerns around public safety.

"We want to reassure the community of Clady we take this issue seriously, and we will be conducting further operations, similar to today's, in the future.

"Our job is to keep people safe, and ensure our roads are safe for everyone."

He added: "We will continue to enforce the legislation and would encourage residents with any concerns regarding this, or indeed any issue, to get in touch with us by calling 101.

For years lorry drivers have been using Clady as a shortcut from the A5 to Donegal and vice-versa, often late at night, posing dangers to villagers and their homes.

Damage had been caused to property in the past and some residents have also had their cars damaged while the village's main thoroughfare has become blocked on occasions.

Local SDLP councillor, Steven Edwards, has urged haulage companies who are ignoring the restriction to cease.

"The Clady HGV restrictions have to be welcomed as a major win for the local village," he said. "I was glad to have played a role in delivering them for the local community in bringing the Infrastructure Minister (Nichola Mallon) to the village and lobbying on both sides of the border for its implementation.

“Unfortunately, since the measures were introduced and signs erected, a number of cross border haulage companies have simply ignored the restrictions which has continued to cause disruption for local residents.

“I am pro the haulage sector. They are doing hugely important work in transporting vital goods across this island and especially deserve significant credit over the pandemic.

"But these companies, which are not local to the wider Clady area, need to stop using the road and respect the restrictions which are in place.

"This is only fair to the residents and the wider community who fought for these restrictions for three decades.

“I have raised this issue with the Department of Infrastructure locally, Donegal County Council and the PSNI who are entrusted to enforce these restrictions.”