Welcome for progress on sale of former Castlederg Police Station 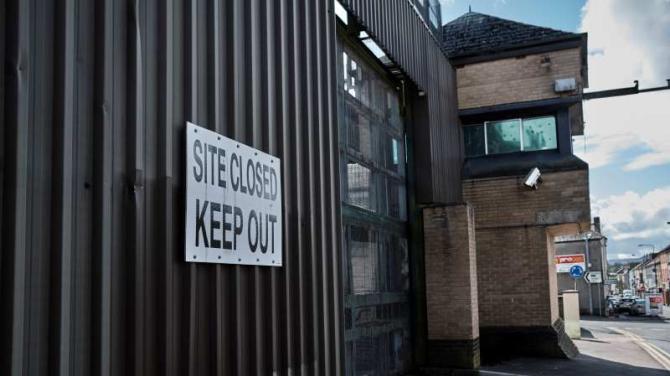 THE process for public bodies to express an interest in buying the vacant Castlederg Police Station is to conclude this month, the PSNI has confirmed.

The station, located on Castlefin Road at the entrance to the town, closed in 2013 and was then put up for sale.

The disposal of the station, alongside two other border stations in Aughnacloy and Warrenpoint, was subsequently halted in 2018 due to uncertainty presented by Brexit.

Last September the PSNI confirmed the station was then back on the market due to the "changing circumstances" of the UK's exit from the EU.

Public sector bodies have until the end of June to express an interest and should there be no sale, the station will then be brought onto the open market.

The development was disclosed to SDLP councillor, Steven Edwards.

The Derry City and Strabane District councillor had written to Chief Constable Simon Byrne following concerns raised about the future of the station and the need for a new permanent and welcoming station.

He has welcomed the move by the PSNI to sell the site however says there are still genuine concerns about police presence in the town following a spate of burglaries recently.

A reply from Louise Dunne, T/Chief Inspector, on behalf of Mr Byrne stated: "In relation to the future of the former Police Station at Castlederg, I can confirm this station was decommissioned for use several years ago and is currently going through the asset disposal process.

"Land & Property Services’ Central Advisory Unit are currently taking expressions of interest from other public sector bodies and this process will remain open until the end of June 2022.

"Subject to outcome, the disposal process will conclude in the sale and transfer of the asset to the interested public body.

"In the unlikely event of no public body being interested in the station, the property will be offered onto the open market for sale."

Councillor Edwards had also queried whether the Police Service would consider a more permanent base in Castlederg town.

"Regrettably given the current funding provision for police resourcing, it is highly unlikely that a permanent base in Castlederg will be reestablished," Ms Dunne added.

"However, you will know that members of the Neighbourhood Team based in Strabane have specific responsibility for Castlederg and the surrounding area and this remains an area of focus for them."

The missive advised that the Neighbourhood Policing Team to meet with councillor Edwards diretcly or through the PCSP forum "to discuss how they can improve visibility and effectively deliver Crime Prevention advice within Castlederg town".

Responding to the missive, councillor Edwards said: “I raised considerable concerns recently about the future of the former PSNI station in Castlederg town which is laying in a dilapidated condition becoming a scourge in the towns landscape.

"It has been like this for many years with the PSNI holding onto it apparently due to Brexit.

“It’s time that the station site is put to better use and in that regard I welcome confirmation that it will be offered first internally to other public bodies and may then go into the private market.

"I’d ideally like to see public investment here and job creation or that the site is put into community use."

He added: "I also requested that the PSNI look into a new, modern and welcoming station for Castlederg given the recent spate of burglaries in the town.

"Castlederg seems to be a target for criminals who know that the town does not have a permanent police presence and they are seemingly getting away with it.

"I’m disappointed that my request for a station hasn’t been met but I will continue to lobby for it and also engage with the community policing team.”