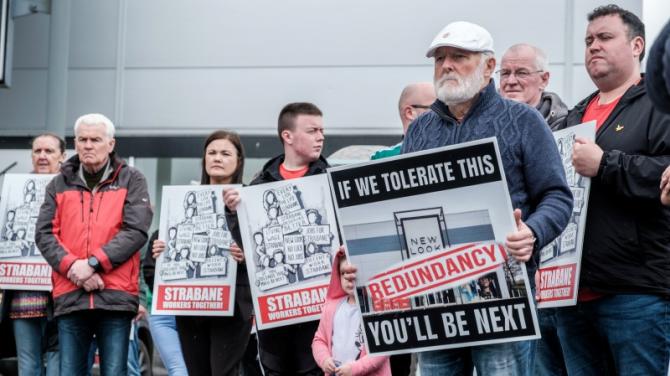 A WORKING group is to be set-up on Derry City and Strabane District Council to address the closure of a retail park in the town ahead of a major redevelopment of the site by supermarket giants, Lidl.

Planning permission was granted to the German company last year for a new supermarket at Strabane Shopping Centre.

This will see the demolition of the existing buildings to facilitate the new supermarket as well as a retail unit at the Branch Road location.

The retail park site currently has four units which are occupied by Argos, New Look, Peacocks and Menarys, but the leases on those properties run out in July.

Lidl says the £8.5 million investment will see the creation of ten new jobs in addition to the 19 already supported at its current location at Bradley Way, however there are fears that up to 50 jobs will be lost when the stores close their doors ahead of demolition.

It's already been confirmed that New Look will be closing with the loss of 20 jobs, while Argos insists it intends to remain in the town if an alternative location can be secured.

As of yet, Menarys and Peacocks have yet to respond to requests to outline their plans post July.

A protest against the jobs losses was held oustide New Look and Lidl last week, organised by the Strabane Workers Together (SWT) grouping.

Strabane independent councillor, Raymond Barr, said that what was once heralded as a good news story for the town, has turned into a disaster for employees.

He raised the issue at Thursday's full monthly meeting of council where he called on the authority to intervene in the issue in an attempt to persuade all four current company's to retain their operations in the town.

He told councillors: "I feel the Planning Committee were wrong to approve this application without first examining the consequences for the 50 plus employees employed in the retail park.

"Also, when approached for input on the issue, Invest Northern Ireland stated this was not in their remit and claimed it was a council issue.

"I can't overstate the damage these closures will cause to the economy and confidence of Strabane.

"The workers in some of these stores have been treated with absolute contempt.

"I feel council, BIDs and maybe Derry Chamber of Commerce, who are recruiting in Strabane, should intervene - even at this late stage - to see what can be done to persuade these stores to relocate locally.

"To that end, I would propose a working group be formed immediately to address the issue."

Sinn Fein's Michaela Boyle supported the proposal and said her party colleague, Órfhlaith Begley MP., had written to the four company's at the retail park, particularly New Look, which is not seeking to relocate.

"In terms of the retention of jobs and the sustainability and asking to relocate, we fully support the proposal that councillor Barr is making in that regard," she added.

"Obviously there's a concern in the town around the jobs and the loss of those jobs."

Seconding the proposal, fellow Strabane independent councillor, Paul Gallagher stated: "There is a potential loss here of up to 60 jobs.

"Whether it's true or not, the perception out there is that this was a decision made by council around the planning that expedited these job losses.

"If the equivalent job losses was happening in Derry - if there was 180 job losses in the middle of Derry City, I believe that corporate council would be out front and centre saying 'what can we do to save these jobs?'"

Councillor Gallagher said council "needs to be saying; 'we need to come out and try our very best as a corporate body to try and save these jobs'."

The SDLP's Steven Edwards was also supportive of the proposal.

"We need to do all we can to help save these jobs and help support the workers of the businesses that look like they're leaving Strabane.

"I know that my colleague, Daniel McCrossan, has been meeting those retail businesses where the jobs are impacted trying to urge them to stay and try to find alternative premises in Strabane, and to save those jobs in Strabane.

"Looking forward to engaging with the working group when it is set-up."

The proposal to set up a working group was unanimously backed within the council chamber.