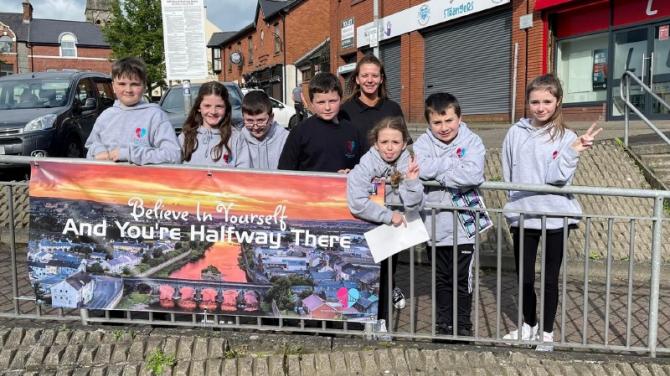 A SERIES of banners with a variety of positive mental health messages and images created by the young people of Springhill Park in Strabane have been erected across the town.

Designed by young members of Springhill Park Area Residents and Youth Association (SPARYA), the work was created to have a positive impact on the topics of mental health and cyber bullying.

Members of the community group's Inbetweener Club came up with positive quotes that inspired them but also those which they thought would make people stop and look.

He explained: "The young people from Springhill Park Area Residents and Youth Association over the last six weeks have been designing and researching positive mental health quotes to put on banners.

"We have placed these banners in places all over Strabane that we feel will give people that little boost they may need within their day."

Explaining where some of the banners have been placed, Brian continued: "One of the banners is placed a the Bog Road walk, a place where people go to think and take time out.

"One is placed at the entrance to Strabane Academy to just give those young people walking into school every morning that thought of greatness.

"A banner is also at the new bridge (pedestrian footbridge) where people go walking to reflect and our last one is beside House Proud.

"The young people have designed and put the project together facilitated by Matthew Tracey at Fresh Print Designs."

Meanwhile, a new podcast aimed at tackling issues around young people's mental health is also being launched by the group later this month.

The 'How to Cope' podcast has involved the young people of SPARYA working with the Koram Centre and Belfast-based mental health organisation, Inspire.

Described as a project 'created by young people for young people' the podcast will focus issues including gambling, teenage pregnancy and suicide.

It will be officially launched on May 25 in the community centre with the podcast going live and those wishing to llisten can do so through a QR code.

Brian explained: "Our young people have created a podcast to deal with aspects of mental health issues.

"They have interviewed people who have dealt with certain issues around mental health and asked questions the young people wanted to know.

"The podcast goes live on Mat 25 at 7pm. You’ll see the QR codes all around the town.

The code is available on leaflets and posters which have been distributed throughout the town, as well as SPARYA's social media platforms.

Once scanned, the code opens up the Anchor podcast software and allows the listener to choose which platform they want to use to stream the audio.

"Springhill Park Area Residents Association are to be commended for their soon to be released podcast, 'How to Cope, focussed on mental health," he said,

"Described as a project for young people by young people, they enlisted the help of the Koram Centre and Inspire to work on this innovative and inspiring project.

"Strabane has had its fair share of young mental health casualties and it's encouraging to see young people taking on an initiative like this. Well done."