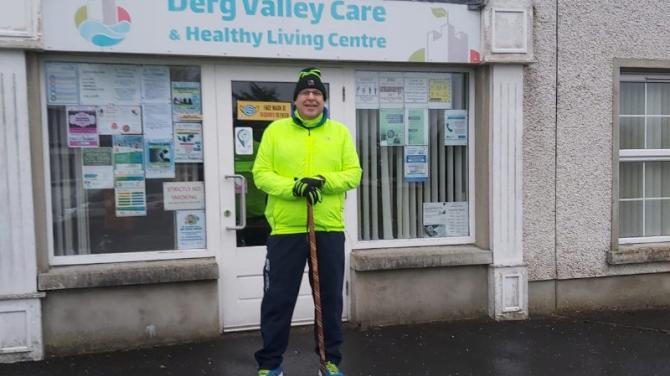 AN inspirational Bready man who has helped raise thousands of pounds for charity over the last three decades has completed an epic walking challenge.

From scaling the peak of Ben Nevis to trekking through Kenya, Ivan Black's charitable endeavours to date have helped raise over £350,000 for causes close to his heart.

Inspired by the memory of lost loved ones, Ivan - who is a Slimming World consultant - regularly sets himself gruelling challenges with his most recent feat seeing him complete a 32.5 mile trek for Cancer Research taking in the three venues of his group, before finishing back at Bready Cricket Club, where he is a past president.

The walking challenge raised £5,000 and will go towards the overall fundraising total for Ivan's team in the Cancer Research Relay for Life event next month.

Speaking about the fundraiser, Ivan explained: "It was a bit of a challenge, but it was worth doing.

"I run a group up in Castlederg, one in the Glenaden Arena in the Waterside and then one in Bready Cricket Club, so the whole idea behind it was to walk to the three venues - 32 and-a-half miles in total.

"I lost my brother Ian to Leukaemia 32 years ago at the age of 23. It was his anniversary on April 16 and I did the walk the following day (Easter Sunday).

"That's why I walked the 32 and-a-half miles. I wanted to do a mile for every year since Ian passed away.

"I made a promise to him on his deathbed that I would keep his memory alive so every year I make a point of trying to do something for charity.

"A few years ago I linked up with the Cancer Research 24 hour challenge - Relay for Life - which takes place in St Columb's Park on June 18 so this was one of my fundraisers towards that.

"As a family we've had a lot of loss to cancer. I lost my sister aged 47 to breast cancer and my father to stomach cancer too. It's a disease that affects everyone."

Ivan continued: "Since Ian passed away, I've done many things like walking the Inishowen 100 miles for the Children's Hospice. I've climbed Ben Nevis for Marie Curie and trekked Kenya for the charity.

"I've also done mini bus pulls for Foyle Hospice. With the help of family and friends, I've raised over £350,000 over the last 30 odd years.

"I like to do something every year and if it helps one person for one day or one week or one family not to go through what so many other people have gone through, it's worth doing.

"I usually hold charity nights but with the Covid situation I wanted to try something different, something to still bring people together in a different way and raise the support for the charity. Thankfully it worked well."

Reflecting back on the day itself, Ivan says he was determined to complete his journey in spite of the weather.

"I had blisters. I was knackered and I was sore but it cleared up in a week. Somebody fighting cancer has a bigger battle than that and that keeps you going even when it got tough," he continued.

"The weather was awful and people were saying I was mad to be out in it, but someone suffering with cancer doesn't get a day off just because it's raining so it wasn't going to stop me either.

"As tough as it was, it was a great experience. I had so much support along the way, with people blowing their horns as well as those who joined me for parts of the route including members from my groups who seen me off and met me half-way and the Cancer Research committee in the city who walked a couple of miles with me.

"People have been so generous. The support was unbelievable and it really did mean so much.

"When I finished up at Bready Cricket Club, for so many people to have turned out to welcome me on Easter Sunday when they all had family commitments - I was so touched.

"Then, to have my two grandchildren, Alfie and Sam, there holding the tape at the end, words can't describe what that moment means to you.

"It was a lovely way to end.

"The whole experience was a bit of an emotional rollercoaster. I thought about my brother, sister and father a lot along the way, as well as the many other people we've lost."

In all, it took Ivan over ten-and-a-half hours to complete the challenge

"I would do it tomorrow again," he laughed. "I wouldn't think twice about it."

Ivan would like to thank everyone who supported him and continues to support his efforts ahead of the Relay for Life event, when he will be joined by members of his Slimming World with Ivan groups.

"All the charities that I have fundraised for over the years have mean't so much to me, but the Relay for Life 24 hour challenge is such a poignant event, and a privilege to be part of," he said.

"It's 24 hours long because cancer never sleeps, and it's that thought that motivates you to push through when you hit the brick wall during the challenges like the walk on Easter Sunday.

"From now until June 18, we've a few other things planned for the overall fundraising for the Relay for Life, and after that I'll get thinking of the next challenge.

"I turn 60 in July too and that was a goal of mine to do another big challenge before then.

"People say about being too old to be doing stuff but you're never too old if you get out there and do it with the right preparation.

"As I said, you couldn't do it all without the support of family and friends, so a massive thank-you to everyone for their continued support."