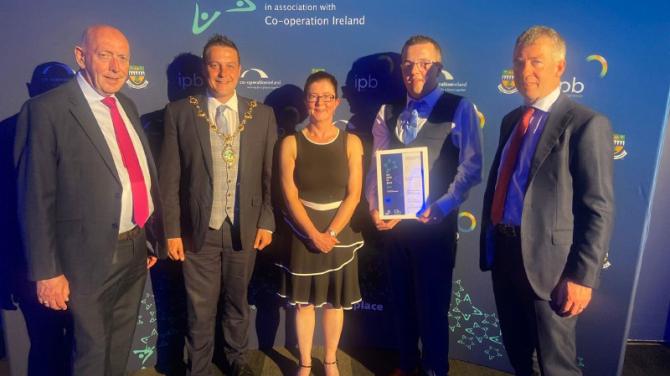 A COMMUNITY group in Donemana is celebrating after being honoured at the prestigious Pride of Place Awards.

The Drummond Centre were among the three local groups from this council area who were successful at the awards held on Monday at the INEC in Kilarney.

The Donemana group claimed the Community Resilience award while the Liberty Consortium at the Playtrail and the Glen Development Initiative were runners-up in the Community Wellbeing and Community Youth categories respectively.

The Pride of Place awards is an annual competition organised by peacebuilding charity Co-operation Ireland and aims to promote and celebrate the best in community development across the island of Ireland.

Mayor of Derry City and Strabane District Council, Alderman Graham Warke, who attended the event as a guest, congratulated the winners.

“The IPB Pride of Place Awards celebrate the selfless efforts of people to make their local neighbourhoods better places to live, work and socialise,” he said.

“All three local projects certainly meet that criteria and I was bursting with pride to be with them as they learned of their success.

“I would like to thank all three award winners whose dedicated work to make a difference in society has been recognised at this event.

“We are coming out of a period where so many people have demonstrated their community spirit by making sacrifices to keep others safe and ease the burden on our health service and I want to place on record my gratitude to everyone for that.”

Pride of Place Chairman Tom Dowling added: “These awards continue to be as important as ever as we are about to start judging the 20th year of the competition.

“The purpose of the awards has never changed, they are about recognising and celebrating the extraordinary, inspirational, and tireless work being done by communities all over the island of Ireland as they strive to make their place a better place to live.”

For further details of the awards visit prideofplace.ie.