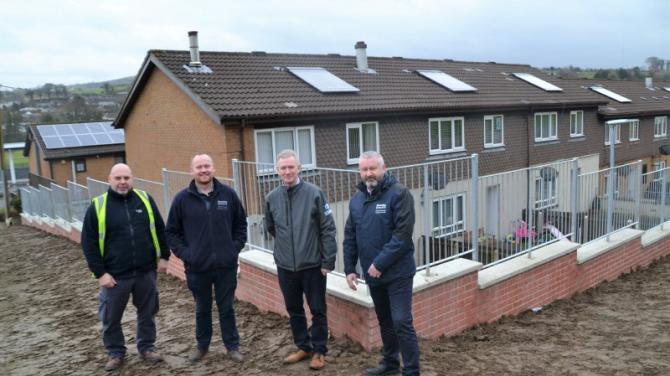 EXTENSIVE health and safety works totaling almost £50,000 have recently been completed to replace a large retaining wall in front of homes in the Ballycolman Estate of Strabane and local residents are delighted.

Working with CFM Contractors and Housing Executive structural engineers, the wall has been replaced, ensuring it is structurally sound and causes no danger to anyone.

“Back in 2017 a section of the wall was taken down and re-built due to pressure from the ground behind it.

"Since then other sections of the wall began showing similar signs of deterioration, with bricks decaying and movement of the wall itself.

“We carried out a detailed inspection with our structural engineers and determined the best course of action was to take down and re-build the wall.

“This gave local residents peace of mind and allowed us to replace the wall with fully strengthened supports to safeguard against any further movement.”

The area has been landscaped and new railings added to finish off the work.

Local resident, Ciara Murphy, who kept the workmen refreshed with cups of tea and biscuits while they worked, is very happy.

“It’s great to see the wall replaced. It was not in great shape before and a lot of the bricks had started to break up,” she said.

“The wall looks much better from my front window, and I know my home is safe.”

The pictures detail how the work progressed on the wall and how it looks today.