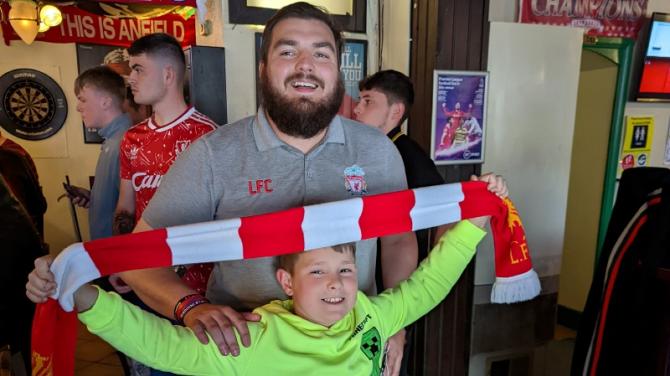 AS Liverpool FC fans across the world celebrated another cup win for their beloved reds, for one adopted Strabane man the win was even sweeter.

Diehard Kopite Shaun 'Amo' Hamilton, who was born and raised in Merseyside but now living in Strabane, savoured Saturday's FA Cup win in the company of his young son, Logan - and the moment has been watched thousands of times online.

Watching the drama unfold on the big screen in Dicey Rileys, father and son collectively held their breath as Konstantinos Tsimikas stepped up to score the winning penalty to seal Liverpool a 6-5 shoot-out victory against Chelsea to win the cup after the final had finished goalless at Wembley.

A video of the moment shows Shaun and young Logan leaping out of their chairs in jubilation with the pair then embracing as fellow supporters also celebrate the win.

The 24 second video, with the caption 'what a moment with my son', was subsequently uploaded onto social media platform, Tik Tok, and has amassed thousands of views since.

At the time of going to press yesterday afternoon (Tuesday), it had been watched by 18,200 people.

It It has captured the imagination of Liverpool fans here, there and everywhere - and is drawing in listeners from across the globe.

He has revealed that he and fellow Scouser, Danny Roberts, are bringing two former Liverpool players to Strabane later this year.

Goalkeeper Chris Kirkland and striker Nell Mellor will be guests on the podcast live from the Alley Theatre on Friday, October 21.

"It's your chance to ask two former professionals any questions you want and there will also be a special guest on the night," Shaun said.

"This is not to be missed for all Liverpool fans."

Tickets are now available by contacting the Alley Theatre Box Office on 02871 384444 or by logging on to the website: www.alley-theatre.com