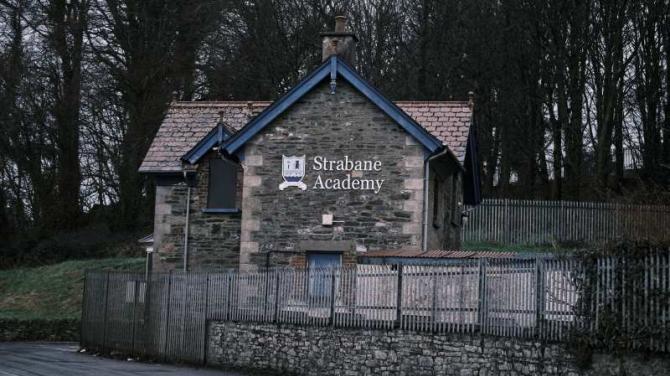 A LOCAL councillor says the opportunity to create a "top class facility" for the town is being eroded due to the failure by the Education Authority (EA) to adequately secure a historic school site in the town.

Independent Strabane councillor, Raymond Barr, was speaking in the wake of a yet another incident of arson at the former Strabane Academy school on Liskey Road.

Police attended the scene of the blaze, which was reported at around 7.30pm last Tuesday night (April 26), along with the Northern Ireland Fire and Rescue Service.

The fire, which caused damage to the derelict building, is being treated as deliberate.

While the main building and portacabins at the former school site have been demolished, the historic Milltown House and Gatehouse remain.

Their close association with the renowned hymn-writer Cecil Frances Alexander, who composed classics such as ‘All Things Bright and Beautiful' and 'Once in Royal David's City', has led to calls for the site to be protected and brought into community use.

Councillor Barr says the site must be properly secured, however when asked recently about security arrangements for the site, a spokesperson for the EA said the Gatehouse building had been secured following a previous incident on March 28.

"Since this demolition, there are no longer any security measures onsite," the spokesperson added.

"The site is being retained by EA for potential future educational use.”

Councillor Barr says Derry City and Strabane District Council must also share responsibility for making sure the site is retained for future generations.

"Our last chance of creating a top class facility which reflects the town's cultural and diverse past combined with our own area of natural beauty suffered another act of vandalism when for the second time an attempt was made to burn the buildings," he commented.

"It is it a matter of time before we hear the buildings have to be demolished because of damage caused while the Education Authority conveniently looked the other way? Why did the EA withdraw security from the site? Why is our council not enthusiastic about acquiring the site and giving Strabane a community asset so badly lacking?

"Derry is getting its Acorn farm with a ten metre solar dome, part of the regeneration of St Columb's Park yet they won’t spend a tosser on Courtrai Park or satisfy the needs of of our children with decent play areas.

"Again, if this was Derry their representatives would be howling and they would be right. Why is this town accepting of second best continuously?"

Councillor Barr says he has continually contacted the EA on the matter and said their replies are "deliberately vague", while consideration is now being given to having a public meeting to impress the importance of maintaining the historic buildings.

"There's nothing said of the specific plans for the site, only that it will be retained for educational use," he continued. "What does that mean? They are being deliberately vague on it and to me that's a stalling tactic.

"I do believe there is another agenda here....that the Education Authority won't be happy until it's off their hands.

"I honestly believe that if there hadn't have been a word about the Cecil Frances Alexander connection, the place would have been flattened - I've no doubt about it.

"I've been looking for council to explore the potential of a community asset transfer but I think they are reluctant to take it on too.

"If it's allowed to be knocked down, a lot of people, including myself, will be very, very angry. It will be a huge missed opportunity.

"It's a site with huge historical, tourism and practical potential especially for something that we don't have in the town - a park and nature trail."

Meanwhile, appealing for witnesses to the fire, Inspector Ken McDermott says enquiries into this incident are ongoing and appeals to anyone who was in the area between 7pm and 7.30pm and saw any suspicious behaviour, or has information about this incident, to call police on 101, quoting reference number 1665 of 26/04/22.

"You can submit a report online using the non-emergency reporting form via http://www.psni.police.uk/makeareport/," he said.

"You can also contact Crimestoppers anonymously on 0800 555 111 or online at http://crimestoppers-uk.org/."

The officer is also appealing to the community to report any suspicious activity within the vicinity.

“Parents and guardians have a role to play in knowing the whereabouts of their children, who they're with, what they're doing and that they're staying safe," he said.

"No one is out to spoil anyone's fun but, what might seem like ‘a bit of fun’ isn’t worth it, and can be life changing with serious implications for the future.”