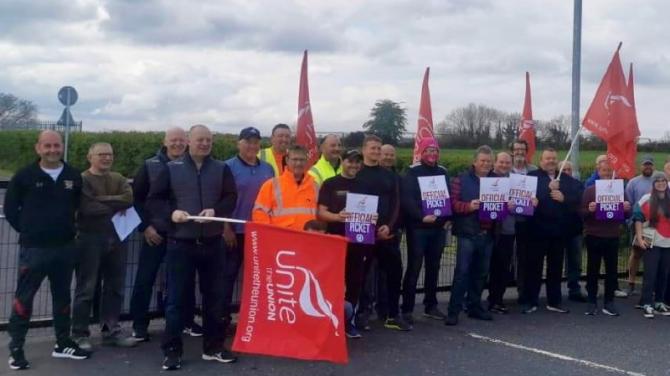 THE monthly meeting of Derry City and Strabane District Council was adjourned after councillors boycotted the meeting in a show of solidarity with striking workers.

Yesterday (Tuesday), council workers who are members of the Unite trade union began the second week of strike action in a dispute over pay.

Workers are striking as part of a dispute over a local government pay offer of 1.75 per cent which Unite has branded a “real terms pay cut” amid the rising cost of living and surging inflation.

Councillors were due to meet for the monthly meeting of the local authority on Thursday afternoon, but a number of elected representatives had previously indicated that they would not cross the picket line physically into the Guildhall chamber or virtually via the Webex platform.

Thursday's meeting was held remotely and broadcast live on council's YouTube channel and it was not clear how many, if any, councillors were in attendance.

Mayor Graham Warke said the required quorum had not been met to proceed.

The rules state that at least ten members must be present for the meeting to proceed.

Opening the meeting - which lasted less than two minutes - Alderman Warke said: "It doesn't seem we have the quorum here to continue the meeting.

"So, what I'm going to do now is adjourn. We need a quorum of ten members so the meeting is adjourned to a further date."

The meeting will now take place on Monday, May 9.

Council says the strike, which is due to conclude on May 8, is having a "considerable impact".

"As a result of the strike action council is experiencing considerable disruption to a number of services such as refuse collection, street cleansing, recycling centres and a number of other services.

"The level of impact is variable across all services and is subject to change as the week progresses."

The spokesperson added that all information is updated on the website at:

It is also communicated regularly via the council's social media channels.