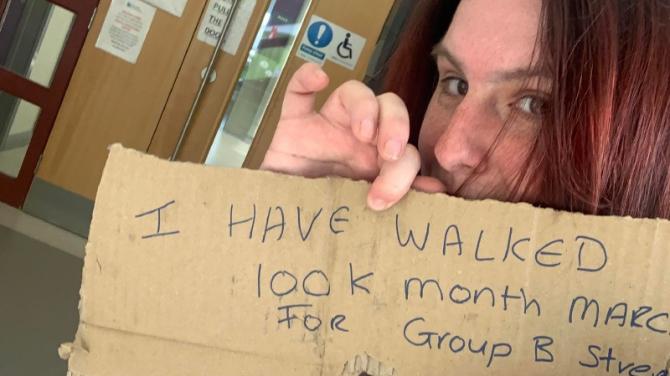 A STRABANE mother has completed an extraordinary feat by walking 100k during the month of March to raise awareness of a potentially life-threatening but preventable condition which affects newborn babies.

Group B Strep (GBS) is a common type of bacteria which is carried by around two to four in every ten women in the UK.

Most women carrying GBS will have no symptoms, and while it is not harmful to the mother, it can affect babies around the time of birth.

It can occasionally cause serious infection in young babies and, very rarely, during pregnancy before labour.

Local woman, Natasha Coffey, has been raising awareness on the issue as it was the bacteria that led to her youngest daughter, Amelia, being treated for sepsis.

As part of her ongoing efforts, she recently embarked on the '100k in March' fundraiser for Group B Strep Support (GBSS) group.

The month-long walking fundraiser culminated on March 25 at Altnagelvin Hospital - with the mother of two completing a gruelling 16.5 miles walking from Strabane to the city!

Looking back on the challenge, Natasha admits it was "tight going" but she enjoyed the experience and helping to raise awareness for a cause close to her heart.

"It took me six-and-a-half hours in total roughly to walk from my house to the children's ward - Ward 6 - at Altnagelvin, but I took breaks between each town," she said.

"I really wanted to raise awareness of Group B Strep. My daughter Amelia, who is one-year-old now, was in and out of hospital after she was born and the doctors never really knew what was going on with her."

On March 25 last year, Amelia was again admitted to hospital and tests subsequently revealed that she had been affected by Group B Strep.

Admitting that the whole experience took its toll on her mental health, Natasha said she was keen to use the walk on March 25 - a year to the day Amelia was admitted to hospital - "to put it all behind me".

"Knowing now that it was Group B Strep that affected her I wanted to walk to the hospital and get some closure after a rough year, and put it all behind me," she continued.

"At the minute there is delays to Amelia's milestones and she has been referred to physiotherapy and a community paediatric for Global Development Delay (GDD).

"It's just an ongoing process, but I think the illness could have affected her that way.

"Some babies come out of it with no effects and others can have long-term effects. It depends on how quickly it is picked up.

"There is early onset Group B Strep which is caught when babies are born and then there's late onset which is harder to see.

"Pregnant women don't get tested for it and only because I bled through the pregnancy, that's how I found out that I had it.

"If I hadn't have bled then I never would have known I had it."

In all, Natasha has managed to raise £450 thanks to her charitable efforts which has been donated to the support group.

She would like to thank everyone who has donated and supported her fundraising.

"I was glad when I finished the Derry walk - I don't think I'll do that one again," she laughed.

"Afterwards, my husband Darren and children (Jason and Amelia) were there to pick me up with flowers and it was a really nice surprise to finish up the challenge.

"As well as the walk on March 25, I also walked the Atlantic Drive in Downings, Knockavoe Mountain and around the town, to get the steps in.

"I enjoyed it and I 've got the walking bug so I'm out walking every other day now.

"This was all about raising awareness of the condition and getting people to be more aware of Group B Strep.

"I'm still going to continue raising awareness to make sure more women are aware of Group B Strep.

"I wear my t-shirt to every Zumba class and on every walk.

"I also keep advising people if their babies are not well breathing wise or with a rash, to mention to their doctors about Group B Strep.

"With Group B Strep there is sepsis and meningitis, and it was the sepsis that Amelia had."