No council meetings during strike 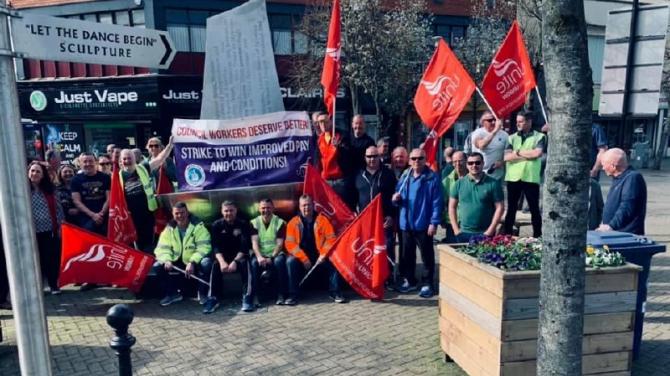 MEMBERS of Derry City and Strabane Health and Community Committee confirmed they will not be attending council or committee meetings as members of Unite the Union continue their strike action.

Elected representatives also sent their solidarity to the workers taking the action with councillor Shaun Harkin calling for councillors to challenge anyone "demonising workers".

The People Before Profit councillor said: “Everybody is aware that council workers, Education Authority bus drivers, Housing Executive workers and others will be taking what anounts to more or less two weeks of continuous strike action starting on Monday.

“I’ve spoken to a lot of council workers and union representatives and obviousy they are very aware of how disruptive the strike is going to be and they would prefer not to be in a position where they feel forced into taking strike action but it is a last resort.

“We are in a cost of living crisis and it’s clear that council workers and many others are rightly aggrieved that they can’t get a decent pay raise to try and meet the spike in costs everybody is facing.

“There are a number of things that we as a council should be doing... I know some people will be frustrated but we shouldn’t allow workers who have kept vital services going through the pandemic to be demonised now because they are taking action for a pay increase.

“As councillors we should be actively challenging anyone, whether they are radio personalities or anyone else that is attempting to demonise workers for standing up for themselves.

“The second thing I think we as a council should do is we should reiterate our corporate position which is that we have given our support to the demands of the trade unions for an above inflation ten per cent pay increase.

"That was a motion we passed in relation to this particular set of negotiations.

"That was done over a year ago and I see no reason to change that. I think it is actually more important right now that we all stand behind that."

He added: "As far as People Before Profit is concerned we will be joining workers on the picket line as we did during the last strike and as others did as well and we won’t be participating in any council meetings which is unfortunate but we believe that this is an important way to show solidarity with workers.

"We would encourage other councillors to do the same which means there won’t be a full council meeting....It seems to me that this will be the last meeting we will be participating in for a couple of weeks and we encourage others not to cross over the picket line even virtually.”

Sending his solidarity to the workers, independent councillor Gary Donnelly added: “Sometimes we feel we aren’t doing enough but as councillor Harkin pointed out we have an absolutely great opportunity to put pressure on behalf of striking council workers by refusing to cross the picket line either physically or virtually. If all councillors and elected representatives stick to that then it should be a great boost for those who are striking.”

SDLP councillor Brian Tierney agreed saying: “You can’t stand in solidarity and then cross the picket line virtually and physically.”

Other party representatives also spoke of their support for the striking workers and confirmed their party will not attend physical or virtual meetings during the strike.