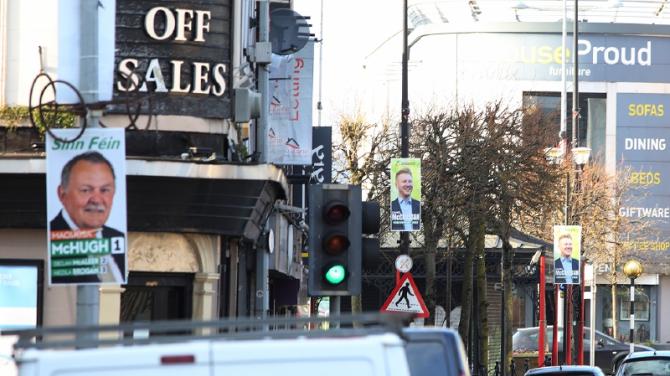 POLICE have issued a warning that interference with and damage to election material is a crime with anyone detected "liable to prosecution".

Voters across Northern Ireland will go back to the polls on May 5 to vote in 90 new MLAs, with five seats in West Tyrone up for grabs.

With just two weeks until polling day, candidates are firmly in election mode but an all too familiar issue has arisen.

Parties across the West Tyrone constituency have reported the removal and thefts of their candidates election posters which have been erected on lampposts across the district.

Sinn Féin's Maolíosa McHugh, who is seeking re-election, said a number of his posters had been removed in various locations in recent days, with the latest incident occurring in Victoria Bridge.

"We will not be deterred and those who are responsible will not stop the movement of change," he said.

The incident follows the previous removal of posters in the village as well as the Castlederg, Sion Mills, Spamount and Bready areas.

"It's disappointing that in this day and age we can’t have respect for each other," Mr Hugh added.

SDLP candidate, Daniel McCrossan, said his posters have also been targeted with six in one area being taken.

He continued: "It has to stop and it has to change. People have moved on and are demanding so much better.

"I am fighting this election on the cost of living emergency which is pushing families and workers into poverty.

"I’m not interested in sectarianism, in the narrow interests of those who simply can’t move on or accept this place has changed. I’m focused on putting the people of West Tyrone first."

Elsewhere, first-time candidate Trevor Clarke, who is running for the Traditional Unionist Voice (TUV), said several of his posters were removed hours after being put up in Castlederg.

He described their removal as a "petty attempt to undermine the democratic process".

"Several of my posters on display close to Edwards Primary School were stolen," Mr Clarke commented. "Those involved were selective in their petty attempt to undermine the democratic process.

"The only other election posters in the vicinity, those belonging to Sinn Féin , were left untouched and undisturbed.

"The element concerned is obviously fearful of what democracy may deliver in the Assembly election, in particular the possibility of an effective Unionist voice being returned to represent the people of West Tyrone.

"Their unlawful interference won’t deter my campaign in the slightest.

"I await with interest the condemnation from across the political spectrum of this juvenile attack on democracy."

Warning that police will "fully respond" to reports of theft and damage to election posters, Chief Superintendent Muir Clark said: “Police have received a number of reports recently relating to election posters being damaged, removed and set alight in various locations across Northern Ireland.

“Thefts of election posters or criminal damage to them will be investigated as crimes, and all reasonable steps taken to recover any available evidence.

"Police will fully respond to these incidents and any identified suspects will be liable to prosecution.

"Like all incidents and offences due consideration will be given as to whether or not they are perceived to be motivated by hate."

The officer added: “We would strongly discourage people from engaging in this criminal behaviour.

"I would appeal to anyone who witnesses the theft of election posters to contact police immediately.”