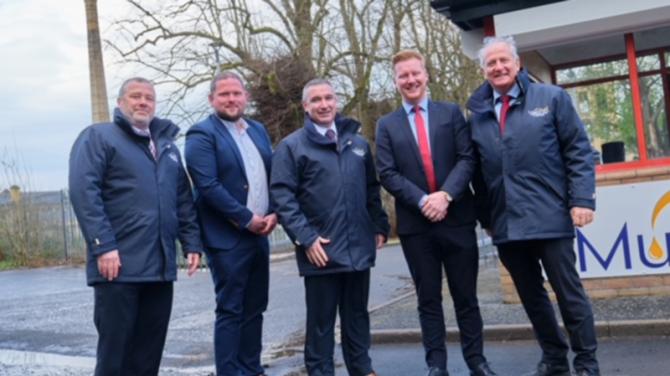 A DONEGAL fruit juice manufacturing company has confirmed it has acquired a section of the former Herdman's Mill complex bringing a significant jobs boost.

It's understood that up to 150 jobs could be created as Mulrines of Ballybofey announced its intention to begin phase one of its ambitious plans to expand their capacity by establishing a manufacturing plant on the site of the former linen mill in Sion Mills.

Confirming the company's intention to begin recruitment in the near future, Mulrines chairman, Peter Mulrine said the company selected the village for its expansion as it a suitable location for their investment.

Key members of the senior management team and many colleagues are from the greater Sion Mills area which further supported this decision," he added.

"Mulrines are happy to announce the future recruitment for a wide range of roles," he said.

"I am pleased we are developing this manufacturing site in Co Tyrone, building on the success of our Ballybofey factory which remains the key facility of our operations.

"Sion Mills and Tyrone is an area of great potential and its skilled workforce was an important factor in our decision to open a new facility.

"I also want to pay tribute to the work of West Tyrone MLA Daniel McCrossan who helped us in our efforts to establish this manufacturing site in the area.

"Daniel offered his assistance and support at a very early stage and showed his determination to help with the various site issues that arose in order to create the platform which will deliver these jobs for his community. We are very grateful for his vital efforts."

Mr McCrossan, who is seeking re-election in May's poll, said the company's investment will bring a significant number of jobs to an area impacted by chronic unemployment.

"I have been working in the background for two years with Peter and the team at Mulrines to deliver these jobs and this investment to our local community," he said.

"In the absence of a proper strategy to address unemployment and strategic investment in West Tyrone, I have been engaging with a number of businesses to sell them on the benefits of basing their operations in our community.

"This is an important day for West Tyrone, for Sion Mills and the wider Strabane area.

"This commitment to create a significant number of new jobs, with more to follow, will make a real difference in this area and I will continue working with Mulrines as they establish themselves as an important part of our community."

He added: "This announcement will provide a much needed stepping stone for investment and jobs in the Sion Mills area.

"It will be a massive boost for our local economy and our local businesses. I hope this announcement will show people that West Tyrone is open for business, and we will see similar positive announcements in the near future."