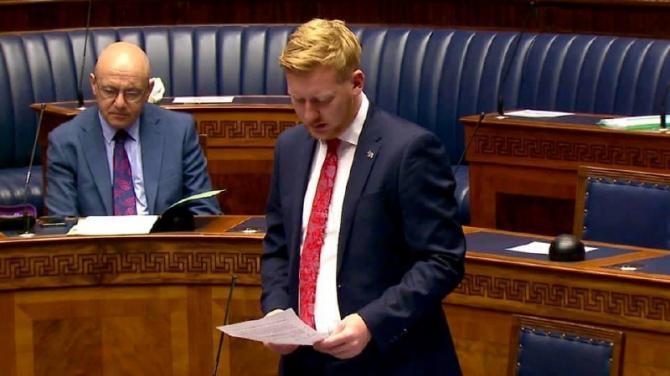 A WEST Tyrone MLA who lost his grandfathers to cardiac arrest has backed a campaign to put lifesaving CPR skills on the school curriculum.

Earlier this year,  the Department of Education wrote to all post-primary school principals setting out its expectation that from the 2022/23 academic year all pupils aged 11 to 14 should be provided with CPR training as part of the school curriculum.

A bill - Education (Curriculum) (CPR and AED) Act (Northern Ireland) 2021 - is currently making its way through the Assembly.

Daniel McCrossan said the bill, introduced by his party colleague, Colin McGrath, which would see every secondary school student taught CPR, could save thousands of lives.

It would also provide students with automated external defibrillator training.

The second stage of the Bill was recently heard in the Northern Ireland Assembly.

Speaking on the potentially life-saving legislation, Mr McCrossan said the "benefits of it for many will be very significant."

"We all saw the horrific scenes earlier this year when, during the Euros football tournament, Christian Eriksen suffered a cardiac arrest," he said.

"It was important that timely treatment was given, and it ultimately saved his life. That brought a stark focus to the importance of CPR and AED training globally and to whether we do enough here to save as many lives as possible when people suffer cardiac arrest.

"I was shocked to learn that, of around 1,400 people who suffer cardiac arrest, only one in ten survive. That is a shocking figure, and it really brings it home.

"Unfortunately, just before COVID, I witnessed a gentleman who was sitting just over from me at Mass take a cardiac arrest. It was a shocking thing to witness, let alone experience.

"A lady who was sitting not too far away acted swiftly and carried out CPR until the trained medical professionals of the Ambulance Service arrived.

"She also administered the AED, which helped massively. Thankfully, the gentleman survived, but, without that lady's swift actions, I do not believe he would have.

"Often when such events happen, people are in a state of shock and do not know what to do. The best thing you can do is act, and that is critical to saving an individual's life.

"Cardiac arrest is traumatic to see and watch, particularly if you are not entirely sure how to carry out CPR.

"It is straightforward to learn, and people should make every effort to have that training, because you never know when someone in your household or elsewhere will be impacted in that way."

"They can be seen in all of our constituencies. They appear in rural areas, in places where crowds gather," he added.

"Following the experience that I have shared, the community quickly moved to raise funds to put a defibrillator at the chapel. That shows the response of the community.

"It would be good to see a register of defibrillators and where they are located, because, in the moment, your mind goes blank, as mine did that day.

"Even though you pass them and see them everywhere, your mind goes blank. You are in a state of flux, and you ask "Where do I go to find one?."

The MLA, who is also his party's spokesperson on education, said his own personal experience also means he is a passionate advocate for CPR and defibrillator training.

He said it is also important for people to be educated on the symptoms of cardiac arrest.

"Many people do not get a warning. A cardiac arrest can just happen, and, unfortunately, it happened in the cases of my two grandfathers. Both of them died from a cardiac arrest: one in hospital and the other at home," he continued.

"Unfortunately, they could not be saved. It is vital that we educate society on what the symptoms are.

"There is a myth that you might be too young to suffer a cardiac arrest or a heart attack.

"The reality is that age does not matter. I have seen healthy, younger, active people go into cardiac arrest and not survive; others had slight symptoms of chest pain and did not get checked; and others had signs of sorts and did not go to be seen.

"If you have any symptom or signs, it is critical that you are seen and receive immediate medical intervention, because, if you do not, something might happen, by which stage it may be too late.

"I welcome the bill; it is close and important to me. I want to touch on the fact that many people in our society live alone and are worried about what to do if they take a cardiac arrest at home.

"In my constituency offices, we have helped many people in those situations with a Careline alarm. Careline is a great organisation that puts a box into people's hallways with a big red button and a speaker system and gives them a pendant or two.

"That alarm is critical in the event that anything, not just a cardiac arrest, happens to someone who lives alone. Those alarms have saved lives.

"People who were not feeling right have managed to hit the button, and, ultimately, they received medical intervention or family members or others have arrived at the scene at that critical moment."

The local MLA said great strides have been made in recent years with training, education programmes and awareness-raising campaigns "but more needs to be done".

"This legislation will help to give a greater understanding of the importance of acting in that critical moment, but we are missing a key part of the jigsaw," he said.

"The SDLP believes that the greater emphasis on CPR and AED training in education settings is critical. I thank the (Education) Minister for moving on that - not that she was not moving before. She has been very good on the issue, and we thank her for it.

"The bill will not only help educate our younger people but give them a true life skill that will empower them to react and take important actions when it comes to potentially saving a life, especially the life of a person who suffers cardiac arrest outside hospital. It could be a family member, a close friend or even a stranger that they may come across.

"The bill is significant as a public health initiative that will ensure that our young people are equipped with the knowledge and skills necessary should they encounter a cardiac arrest.

"It will also help drive up survival rates, increase the likelihood of people being treated swiftly and, ultimately, save lives in communities across the North."