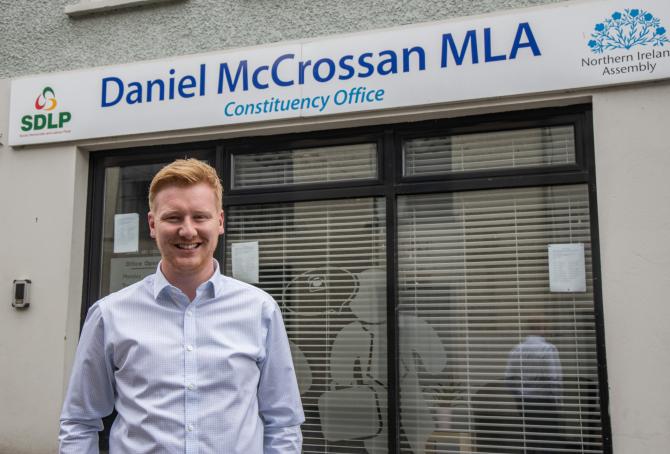 SDLP education spokesperson and West Tyrone MLA., Daniel McCrossan, has welcomed the opportunity to highlight the challenges currently being experienced in schools as a result of COVID-19.

SDLP MLAs are backing a Sinn Fein petition to recall the Assembly to discuss the issue.

Mr McCrossan has consistently highlighted the concerns of school leaders and parents and wrote to Education Minister Michelle McIlveen again this week to stress the seriousness of the situation.

He said: “I have been spelling out the dire situation developing in our schools for some months. I have repeated the concerns expressed to me by school leaders and parents and despite multiple warnings nothing was done to mitigate the situation in schools.

"It’s highly regrettable we now find ourselves in this position, but it’s down to lack of leadership from DUP Education Minister Michelle McIlveen and her department."

He continued: “It’s only right that given the situation schools and their pupils are facing with their return this week that Minister McIlveen appears before the Assembly and explains exactly how this was allowed to happen?

"Time and time again we have seen principals left to make last minute decisions on how best to protect pupils from the virus due to a lack of direction from the Minister and her department."

He added: "We are two years into this pandemic and it seems that no lessons have been learned.

"I have once again written to Minister McMcIlveen calling on her to put an emergency plan in place to ensure our young people can continue with their education, while also doing everything we can to keep them safe.

“If we are going to keep our schools open safely we need to see a reserve list of teachers and education staff drawn up to replace those who are forced into isolation and a wide-scale review of the mitigations currently in place, including ventilation where we have seen significant movement in other jurisdictions, but continued foot dragging here.

"Doing nothing was never an option and I hope this recall will force Minister McIlveen to get her head out of the sand and listen to the pleas of our school leaders and parents.”