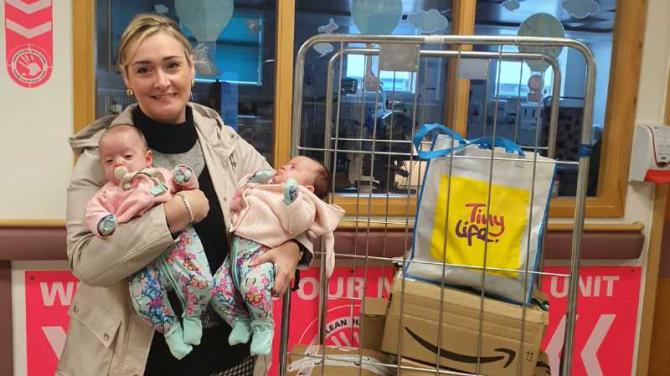 A PLUMBRIDGE family has made a generous donation to Altnagelvin Hospital's Neonatal Unit to thank them for caring for their premature born twins.

Annie and Mary McCullagh where born prematurely at 31 weeks on July 16.

Both girls spent some time in Royal Neonatal Unit before they were transferred to Altnagelvin Neonatal Unit where they stayed until discharged home at 37 weeks.

Their mum, Maeve, decided to do a fundraiser for both units which was based around two scarecrows that Maeve and the twins older brother and sister, Peter and Rose, helped to make.

The scarecrows were male and female and you had to guess their names and make a donation of £5.

The funds raised for Altnagelvin’s Neonatal Unit was spent on breastfeeding equipment and the remainder of the money was deposited into an account with Partridge Peartree to use for various items including cool bags with logos printed etc.

A spokesperson for the Western Trust said: "The Western Health and Social Care Trust (Western Trust) gratefully acknowledges a generous donation from the McCullagh family from Plumbridge to Altnagelvin Hospital’s Neonatal Unit.

"The McCullagh family were blown away by the generosity of the public who supported their fundraising efforts and staff in the Neonatal Unit wish to pass on their sincere gratitude to everyone who contributed.

"Thank you so much to Maeve and her family for making this donation to the unit which will benefit the babies and families who require our care and support in the future."