Minister 'kicking can down the road' on junction safety assessment 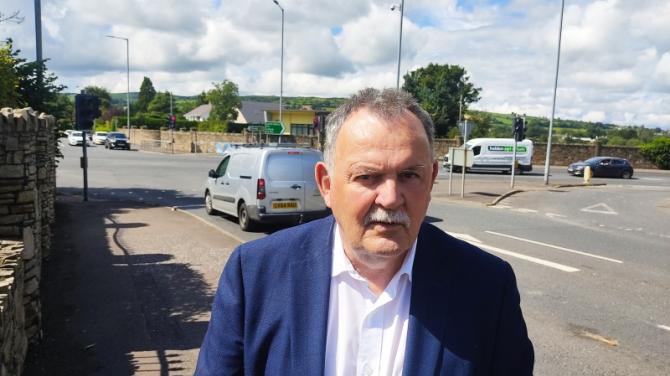 FRESH safety concerns have been raised about one of Strabane’s busiest junctions after it emerged that a long-awaited traffic assessment has been delayed.

Sinn Féin’s Maolíosa McHugh has been pressing the Department for Infrastructure (DfI) for action at the site of the traffic lights where the Urney Road meets the Great Northern Way bypass.

The junction is at the town’s busiest thoroughfare and thousands of vehicles travel along it daily onto the main A5.

In recent years concerns have been expressed by locals following a number of accidents and near misses.

It was also the scene of a fatal crash in April 2017 when Strabane woman, Margaret McLaughlin (69), who was a front seat passenger in a car being driven by her husband, was killed when the driver of a lorry ran a red light and collided with their vehicle.

Previous commitments by DfI to reassess traffic management in the area have yet to materialise.

She was responding to a written Assembly question from Mr McHugh asking if the assessment had been undertaken and to "detail any design changes or changes to the operation of traffic lights deemed necessary to enhance motorist and pedestrian safety."

"Further investigatory work is planned to be carried out at this junction to inform any decisions about possible design changes.

"It is expected that the survey will be carried out early in the New Year."

A frustrated Mr McHugh said he is disappointed at the failure by the Minister to deliver on repeated promises to undertake the survey.

He said the junction is "extremely hazardous" and action is needed imminently to make it a safer route for both motorists and pedestrians.

“This survey was first promised by the department in November 2019," the West Tyrone MLA said.

"The Minister has now informed me, in response to my latest written question to her on the issue, that the survey will not now be carried until 2022."

He continued: “I am extremely disappointed that the Minister has kicked of the can down the road again.

“This is the by far the most hazardous junction in the town of Strabane.

"Unfortunately, there has been one fatal accident, many serious accidents and multiple near misses.

“There must be no further delays in undertaking this survey/reassessment or any follow up delays at this junction and the implementation of any design changes deemed necessary to ensure the safety of all road users and pedestrians.”