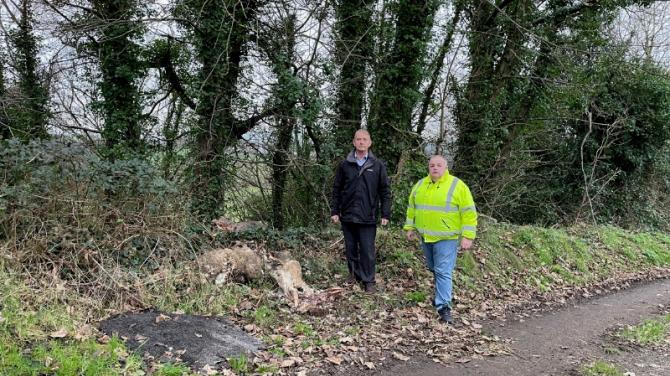 THERE has been considerable anger following the dumping of carcasses of dead animals close to a popular beauty spot in Ballymagorry.

The decaying carcasses of several sheep were dumped on land beside Maple Road, not far from a waterfall that is popular with walkers in the village.

The unsavoury scene was discovered just days before Christmas and subsequently reported to the relevant authorities, however it's understood that due to the holiday period the process of removing the dead animals has been delayed.

Alerting the public to the gruesome find, a spokesperson for the Brighter Ballymagorry Development Group (BBDG) posted on social media: "Sadly we have to report that somebody has being using the local beauty spot of Maple Road as an illegal dumping area for seven dead sheep. Words fail me to say anymore!"

The area continues to be plagued by illegal dumping despite repeated appeals for an end to the ‘disgraceful’ actions by the local community group and elected representatives.

DUP Sperrin councillor, Alderman Maurice Devenney, visited the site along with BBDG chairman, Leslie Hetherington, and said locals are angry that it has been targeted in this way again.

"It's a disgusting sight - unbelievable," he said of the shocking discovery. "This is a scenic part of the village and a lot of people walk that area.

"The walking groups walk around that area and the general public walk it, including many young families.

"The condemnation that I'm getting from the public is serious about how this can be allowed to happen and how do we stop it? People are very angry."

"Another problem that this causes again is that it tarnishes the good name of the majority of farmers out there who are doing their level best to keep to the highest standards," he said.

"There are many farmers who are out there working tirelessly, and who dispose of animals in the right manner when they lose them.

"We don't know what these animals died of and whoever did this needs to reflect on their actions.

"This happens time and time again in this particular area - and it has to stop."

The animals had their tags removed, as have dumped carcasses in the past, so it's impossible to trace them back, but the DUP councillor said it could not be ruled out that it's the same person responsible.

"This happened a few months ago. Whoever has done this removed the tags before they were dumped so you can't trace them," he said on Monday.

"But, somebody out there knows who did this and knows where these animals came from.

"It's a quiet, rural road and the person responsible is familiar enough with the area to know it's out of the way.

"It's a shocking scene for anyone to come across. It's a gruesome sight and the odour as well is disgusting.

"I had requested council to remove them and they are in the process of being removed."

Urging anyone with information to come forward, he said the "disgraceful" behaviour will only stop when people are caught and brought to book.

"There is no excuse whatsoever for this disgraceful behaviour," he continued.

"Anyone with information on the illegal dumping of animals should pass it on confidentially to myself, the PSNI or to our council.

"I would urge the public to be vigilant in the area to large vehicles etc too.

"It's a lovely spot and it's such a shame to see it being targeted in this way with the illegal dumping of animals, and the continuing fly-tipping as well."