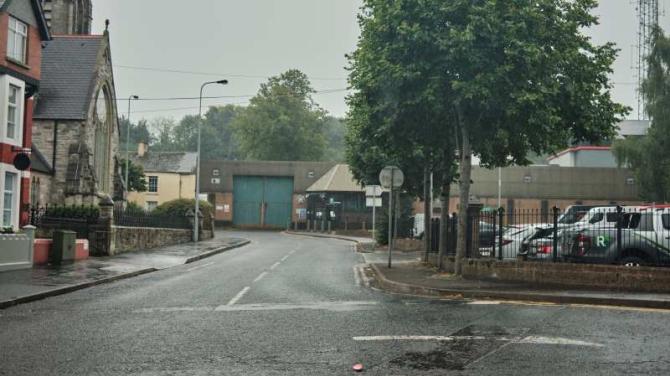 THE heavily fortified surrounding of Strabane PSNI station is being reviewed.

That's according to a missive sent to Derry City and Strabane District Council by the PSNI's chief operating officer.

Described as a "relic of the past", some local politicians say the imposing Bowling Green structure should be removed or replaced.

Calls for the demilitarisation of the station have intensified following a 172 page policing review earlier this year that recommended that Northern Ireland's most fortified police station at Crossmaglen in South Armagh should close.

Speaking following the publication of that review which included 50 recommendations, PSNI Chief Constable Simon Byrne said the station is "an emblem of the past" and had "no place in modern policing".

One of the main recommendations in that report is the closure and disposing of the Crossmaglen site within the next five years.

The structure has heavily-fortified security installations and watchtowers but the base "does not provide a positive or effective policing presence", the report stated.

Local elected representatives say the same can be said of the Strabane station, with concerns also voiced over the impact on residents in Courtrai Park where sangers and CCTV cameras overlook their homes.

A motion passed at council earlier this year, initially tabled by independent councillor Paul Gallagher and subsequently amended, called for a review of the station as well as the courthouse on the Derry Road.

Council had written to Chief Constable Simon Byrne calling for the demilitarisation of the Strabane station.

In response, the PSNI said it is in the final stages of agreeing an 'Estates Strategy' which is giving consideration to creating "more welcoming and accessible" facilities.

In a letter to council, Pamela McCreedy, chief operating officer, PSNI, said: "The Police Service of Northern Ireland are in the final stages of agreeing an Estate Strategy which addresses the longer term vision for the estate.

"The strategy identifies the key strategic priorities to be implemented over the next five years, outlining the main corporate goals against the Horizon 2025 Service Modernisation Plan.

"One of the main goals within the strategy is to create more welcoming and accessible facilities across the entire estate, which includes Strabane Police Station.

"This will involve a range of actions, including the reduction of hardened structures, where possible, to be replaced with a more aesthetic appearance in the street scene.

"The Estates Team are currently reviewing all station frontages and will in the coming months be preparing proposals for redevelopment for implementation in the next two to three years.

"Consultation with interested stakeholders, including the council, will be undertaken during the design and planning process to ensure community engagement is at the heart of the process.

"There will be a security assessment as part of the design and implementation proposals.