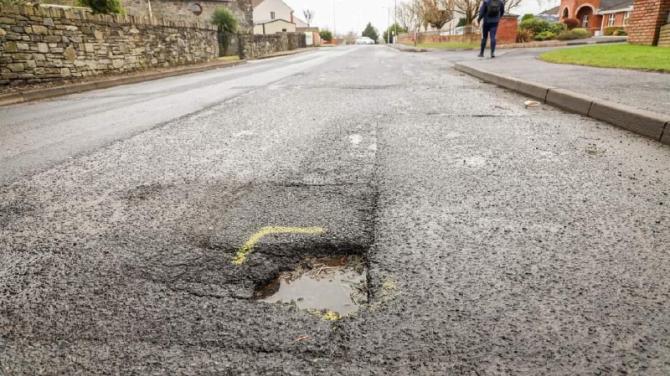 COUNCILLORS have voted in favour of a motion to write to the Infrastructure Minister calling for "badly needed investment" in the local roads network.

A motion on the matter came before Derry City and Strabane District Council's monthly meeting.

It follows confirmation earlier this year that ten road resurfacing schemes in the Strabane district area are among those in four council areas facing delay with millions being left unspent due to a legal challenge.

The list includes schemes in Castlederg, Newtownstewart and Strabane collectively valued at £1.4 million.

Across the entire Derry City and Strabane District Council area, 24 schemes valued at £3,606,000 are facing delay.

The road resurfacing works have been suspended for several months due to a legal row over the awarding of tendering contracts.

Roads Minister, Nichola Mallon, had said that as a result of legal challenges it was decided to discontinue the procurement competitions for asphalt resurfacing which included the contracts for four council areas in the western division.

"My officials having been working at pace to develop a new procurement strategy and this has now been completed and published," she said.

"It is proposed to tender the work in four phases with six contract areas in each. The first phase is being developed with an intention of going to tender shortly, leading to the award of new contracts in January 2022.

"This first phase includes the majority of the four areas that were impacted by the legal challenge to the previous competition.

"In addition, the first one-off resurfacing contract in one of the affected areas is currently out to tender and a number of other similar one-off contracts are in the pipeline for the coming months."

The impact of the legal challenges was referenced in the morion which was tabled at council by Sinn Féin's Sandra Duffy.

It stated: "That this council acknowledges the unacceptable condition of our road network; notes that the allocations from the Finance Minister allowed for the structural maintenance budget to be £120 million this year; regrets that resurfacing contracts have now been delayed until next year in this council area due to a legal challenge; is frustrated that badly needed investment for our roads is now delayed until next year and that this area has missed out on a year of proper investment in resurfacing; and will write to the Minister at the Department for Infrastructure (DfI) calling for badly needed investment to be forthcoming for our roads as a matter of urgency and as soon as possible."

Several members spoke in support of the motion.

DUP Sperrin councillor, Alderman Devenney commented: "We're all very much aware of the sad state our roads are in at the minute.

"I would say they are probably the worst I have seen them in at least 20 years, and it's sad to hear there is an issue about badly needed investment now being delayed for another year.

The Alderman said the issue has been "raised time and time again" with DfI officials adding that rural roads are "in a sorry state".

"We need to write to the Minister to address this issue as soon as possible."

Strabane Sinn Féin councillor, Michaela Boyle, acknowledged that DfI "endeavour to carry out as many schemes as possible in our council area each year."

"I've been in contact with the department about a road in my own area for quite a number of years, to try and get it up to the matrix - the scoring - to get resurfaced and for various safety measures to be put in place on it.

"Unfortunately, it falls between the stools because of the priority rating.

"Resurfacing schemes have come and gone, however in Strabane we seem to be the poor cousin."

Councillor Boyle said constituents believe there is a "significant regional disparity when it comes to our road infrastructure here".

"They believe we are being deprived in comparison to other parts across the North when it comes to good road infrastructure and road schemes," she added.

"There is a serious lack of investment."

Councillors across the chamber gave their support and the motion passed unanimous.