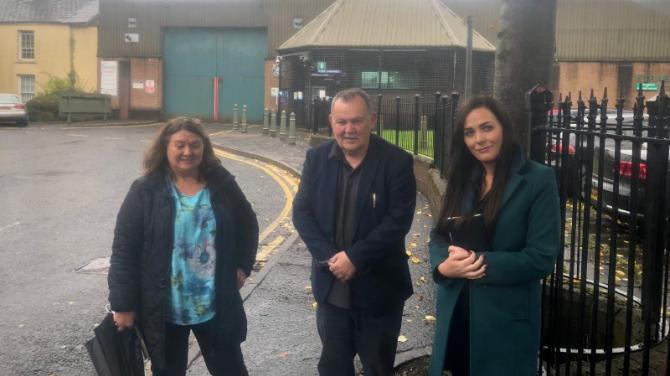 STRABANE's police chief has welcomed the opportunity to discuss the modernisation of the town's police station.

Chief Superintendent Ryan Henderson was speaking following a meeting with representatives from Sinn Féin who pressed for action on the demilitarisation of the heavily fortified structure at Bowling Green.

The senior police officer said the PSNI is working to finalise its Estate Strategy which seeks to modernise its facilities.

Chief Supt Henderson said: “I welcomed the opportunity to meet with local elected representatives and discuss a number of matters with them and reflect on the views of the local community, including the modernising of Strabane Police Station.

“The ongoing regeneration of Strabane town and the fantastic opportunities presented through the Derry City and Strabane City Deal is to be welcomed by everyone, including local police and I look forward to seeing this progress in the weeks and months ahead.

“This strategy will seek to provide a modern fit for purpose police estate for the future.”

"Following representations I have made to the Chief Constable, I requested this meeting with the PSNI to further press for action on demilitarising Strabane Police Station," the West Tyrone MP said.

“Sinn Féin representatives have long campaigned for the demilitarisation of this station and have particularly lobbied for the removal the unsightly and intrusive sanger which so negatively impacts on the quality of life of residents of Courtrai Park.

"It has been over two decades since the Good Friday Agreement therefore the time for these type of fortified structures have long since passed.

"The current station is an eyesore and a reflection of our turbulent past which contradicts the type of image we are trying to build through regeneration and investment from initiatives such as the city and growth deal."

She added: "The Police Service often state that they pride themselves in community policing yet this building does not represent the present day realities nor is it welcoming to the local community.

"We had a forthright meeting with the police and reflected the views of local residents in their calls to modernise this building.

"The Chief Superintendent Ryan Henderson was in agreement that this is a timely opportunity in light of the recent South Armagh Policing Review and the ongoing work to regenerate Strabane town."