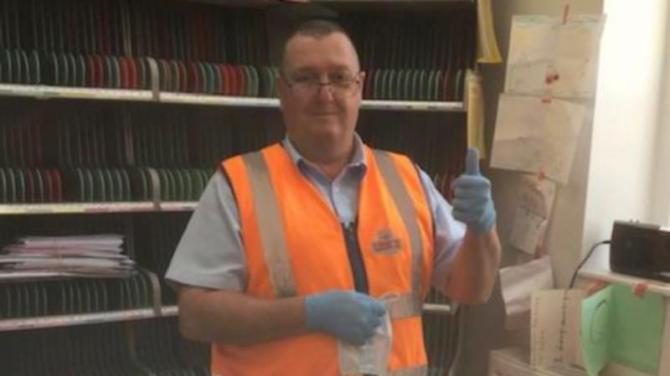 A LOCAL postal worker has certainly 'put his stamp' on his career at the Royal Mail Delivery Office in the town having stepped down from a career spanning over three decades.

Paul Carlin has decided to hang up his delivery pouch for the final time bringing the curtain down on 35 years as a proud Strabane 'postie'.

The Strabane man began his career in April 1986 with his first post route delivering mail to the residents of the Ballycolman.

Since then he has visited many areas of the town and surrounding countryside as a rural postman but his longest postal duty was serving the people of Hill Mount Grove, Glenview Park, Curlyhill Road, Liskey, Camus, Bearney, Carrigullen, Legfordrum, Deragult and Evish - carrying out the 'Legfordrum delivery'.

Speaking this week of his retirement, Paul spoke of his highs and lows during his career.

“I remember my first day in Strabane like it was yesterday, with so much pride," he said.

"I walked up to Castle Street from Lower Main Street where I lived with my wife Loretto and our two daughters, Lisa and Paula - Claire arrived in December the same year - to begin what was to be the rest of my working life.

"The Strabane office was and has always been a tight, close knit community and it has been a privilege to have played my part of its history.

"My first big memory was the terrible flood which hit the town in October 1987. Our house in Lower Main Street was devastated and the delivery office was almost destroyed, but the mail never stopped and deliveries continued throughout with minimal disruption.

"The Troubles were coming to the final stages during my early days but there still was the incidents which shocked and disrupted our routine but never halted it completely.

"The industrial relations between the Communication Workers Union (CWU) and Royal Mail was always bubbling just below the surface and would erupt every so often.

"But the solidarity within the Strabane Delivery Office branch was never in question and on more than one occasion Strabane led the fight on workers rights and pay disputes in Northern Ireland.

"Strabane Delivery Office was one of the first in the northern sector to move to a five day week led by a young but steadfast union man, Martin Duffy."

With NI's political landscape improving, Paul said things began to become "more normal" with the post, and he assumed many roles during his career.

"Carrying out these roles gave me so much confidence, knowledge and lifelong friendships.

"In my 35 years I have served under ten delivery office managers in the Strabane office.

"All were individuals who I totally respected and I can say, without fear of contradiction, were unique in themselves and in their interpretations of how to carry out their role as delivery office managers."

Over the years Paul has witnessed many changes in the postal service, not least the challenges presented by the COVID-19 pandemic.

He continued: "The job has changed over the years in so many ways. From the vans to the technology now in use on delivery, to the new improved uniform but the biggest change has being the amounts of mail we are delivering today.

"March 2020 began the hardest time in my career with the emergence of the worldwide COVID-19 pandemic.

"Initially, the business wasn't prepared for both the virus and second the enormous rise in mail due to the upsurge in online activity.

"The Strabane office was small to begin with but during the initial weeks and months of the current crisis, we were totally swamped daily."

Both had an impact on staff and Paul admits "it was this that completely floored me personally" causing him to retire earlier than planned.

He has been on extended ill health leave since March 2021 having suffered a minor breakdown but with the help of his close friends, immediate family and Royal Mail's occupational health department, he has braved his ill health and has bounced back to almost full health again.

"Since August 2021 I have made great strides in my recovery and with the help and assistance from my family and friends, work colleagues, Royal Mail's occupational health team and locally, the Koram Centre I hope to be back to full health very soon," he said.

"I will miss the comradeship within the office and the unique atmosphere encountered every Christmas - the best time to be a postie for sure.

"I have truly being blessed when working for Royal Mail and I can say with hand on my heart, the friends I have made will last for many years to come.

"I have enjoyed my time delivering peoples mail and I will always remember the friendliness, warmth and generosity shown to me throughout.

"And, to those customers I would like to extend a heartfelt thank you to each and everyone."

Paul's last day working for Royal Mail will be November 19.