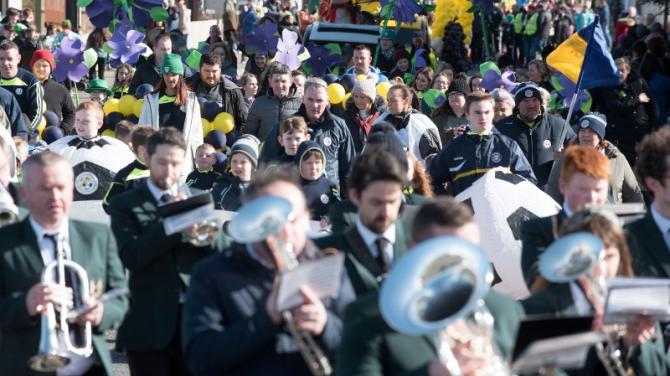 THE annual St Patrick's Day parade in Strabane will revert to its traditional route down the Melmount Road in 2022, council has confirmed.

Councillors approved plans for the return of the annual March 17 parade to the city and town after a two year break due to the pandemic.

At a meeting of Derry City and Strabane District Council last week councillors also agreed to change the new route in Strabane which had been adopted by council.

For many years the annual spectacle set off on the Melmount Road before making its way through the Brigend and culminating in the town centre however when council took over the running of the celebrations in 2018 the route changed to become more town-centric.

The move prompted widespread criticism as it meant residents in the Melmount area not able to travel into the town, particularly those of the local care homes, missed the parade.

Others also claimed that the break from the traditional route also affected the atmosphere.

At a meeting of the local authority's Business and Culture Committee, councillors were told the parade will be re-routed.

"In Strabane the Festival & Events team aim to continue to enhance and grow the community organised street carnival parade through recruitment of participants, management and delivery of an eight-week carnival skills development and carnival arts creation programme," head of culture, Aeidin McCarter, explained.

"This carnival arts programme will lead to showcase activity at the St Patrick's Day parade.

"Organisers had been asked by members to explore the option of reverting back to the original route of the St Patrick’s Day parade incorporating the Melmount Road.

"The Festival and Events team will continue to work with council departments, the BID group, arts and cultural organisations and venues and local business to develop and promote a full festival programme for Strabane and district based around highlight events and programme including live music and performers to complement the carnival parade."

The overall budget for the St Patrick's Day festivities is £106,000 with £30,000 allocated specifically to Strabane activity.

"To cover the additional costs of extending the parade route within the existing budget would see a reduction in town centre activity and a concentration on parade activity only."

Ms McCarter said the return of the parade is the next stage in the phasing in of public events and that measures will be in place to ensure the safe delivery of the programme.

It follows the successful delivery of the annual Halloween celebrations, which were redesigned this year with a major focus on public safety.

Sinn Féin councillor, Michaela Boyle, said the return of the celebrations is a major boost.

"It is great news that after a two year gap the St Patrick’s Day parade is to make a return next year with an agreement to revert to the original route incorporating the Melmount Road with a confirmed allocation of £30,000 towards the local festivities," she said.

“The success of the local parade has always been its vibrant community participation. As we hopefully continue to move out of lockdown, I would appeal to as many community, cultural and sporting groups as well as local schools to make a special effort to become involved by positively responding to council’s Festival and Events team.

“The team will be facilitating an eight-week carnival skills development and carnival arts creation programme and promoting a full festival programme for Strabane and district based around highlighted events including live music and performers to complement the carnival parade."