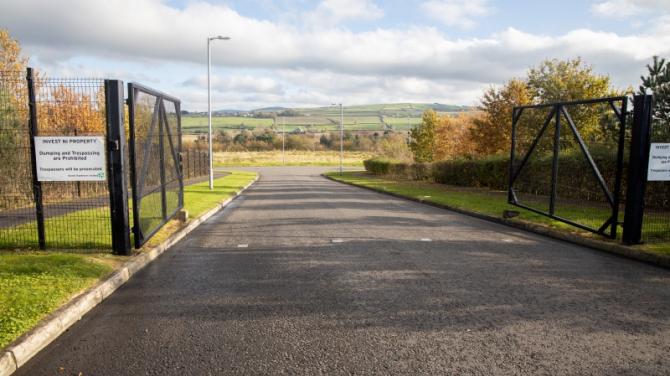 Economy Minister Gordon Lyons provided the update on the Melmount Road base in response to Assembly questions from local MLAs, Sinn Féin's Maolíosa McHugh and the SDLP's Daniel McCrossan.

To date, two companies have established bases on the site in recent years, Dragon Brand Foods and the KES Group.

A third - Donegal based manufacturing firm Houston Precision Engineering (HPE) - is also building a new factory on the site.

Earlier this year the company announced that it had purchased over three acres of land to build a new factory, which will lead to the creation of over 40 new engineering jobs.

A planning application was formally lodged with planners on Derry City and Strabane District Council back in August.

The investment means only one site is now remaining on Strabane Business Park.

Further expressions of interest are currently being explored bringing the park close to capacity in the near future, with Minister Lyons saying he is hopeful they will reach a positive conclusion soon.

"The development of Strabane Business Park by Invest NI was a long-term investment in the economic infrastructure of West Tyrone," Mr Lyons said.

"To date three companies have chosen the Park as the location to bring forward their new investment projects.

"There remains a keen interest in the Park and discussions with potential investors are continuing.

"I am hopeful that these will lead to further investments for Strabane in the near future."

He added: "Invest NI will continue to market Strabane Business Park to businesses, both indigenous and external to Northern Ireland, as an attractive investment location."

Opened in March 2013 following an investment of £6 million, the site was designed to address the shortage of industrial land available across the district and play an important role in supporting economic development in the local area.

Maolíosa McHugh said it was positive to hear that companies remain interested in locating to the site.

"I recently asked the Economy Minister for an update on Strabane Business Park," he said.

"Whilst his response doesn't point to any new businesses locating there in the immediate future, it is positive to hear that there remains a keen interest from potential investors.

"Along with party colleagues, Órfhlaith Begley MP and councillor Michaela Boyle, we will now be seeking a meeting with Invest NI to discuss the Minister's response.

"I and Sinn Féin remain committed to bringing jobs to West Tyrone."

Similarly, Daniel McCrossan welcomed the current investment in the site, but has urged Invest NI to ensure it reaches its full potential.

“The message needs to be put out clearly that Strabane is open for business," he commented.

"Not just for external investment but also for our own local businesses. Everything possible needs to be done to support businesses here while also attracting additional investment and jobs.

“I hope we have much greater success in terms of businesses using Strabane’s Business Park."