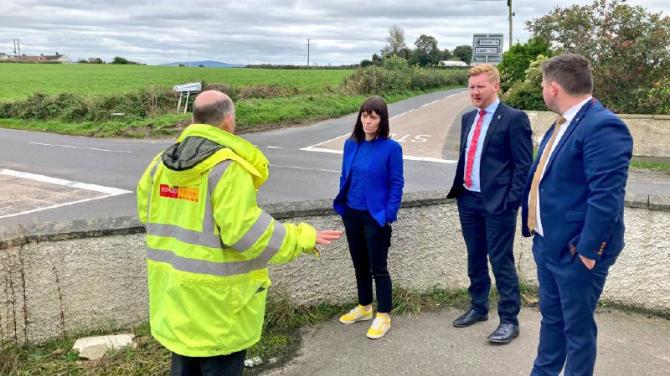 MINISTER for infrastructure Nichola Mallon has witnessed the inherent dangers of a notorious accident blackspot outside Strabane.

For several years now the junction between Bellspark Road, Prospect Road and Orchard Road in the Glebe area has been the scene of numerous accidents and near misses.

Local politicians have been raising the issue for years, warning that recent incidents are a stark reminder of the need for a scheme to be brought forward before there is a major tragedy.

During a visit to the district, Minister Mallon visited the area to hear significant road safety concerns raised by her party colleagues, Daniel McCrossan MLA and councillor Steven Edwards.

Speaking from the scene, the Minister said: "Daniel and councillor Edwards have raised this issue a number of times with me and I wanted to come so that I could see this junction and see the concerns for myself."

A number of interim measures have been installed by the Department for Infratsructure (DfI) including increased signage and rumble strips, while the Minister says the intention ultimately is to redesign the crossroads to a "staggered junction", with the acquisition an demolition of the Prospect Bar key to this.

Mr McCrossan said he told the Minister that this junction is one of the "most dangerous in the North" and impressed the importance of road safety improvement schemes being advanced immediately.

“I was delighted to bring Infrastructure Minister Nichola Mallon to the Prospect junction in the Glebe to see first-hand the severe road safety concerns that exist," he said.

“This junction has become notorious for accidents and collisions where we have so far been lucky no one has lost their lives.

"Over recent weeks, we’ve had some really bad accidents here with one collision requiring the Air Ambulance.

“I was happy to receive reassurance from Nichola Mallon that DfI will be doing all they can to advance a road safety improvement scheme.

"This scheme is now at an advanced stage and hopefully work will begin in the coming months.

Derg councillor Steven Edwards told the Minister that there is a genuine fear among residents that there will be a fatality at this junction.

“It was great to have the Minister in the Glebe where I conveyed the major concerns of the local community around this junction," he commented.

“While I have welcomed the recent rumble strips put down, they are not an ideal or long term solution.

"We really need a permanent long term scheme that will deliver for local residents and improve safety.

“The SDLP will continue to lobby for this scheme until the last sod is laid. We are happy that the issue is now firmly on the Ministers table and on her agenda.”