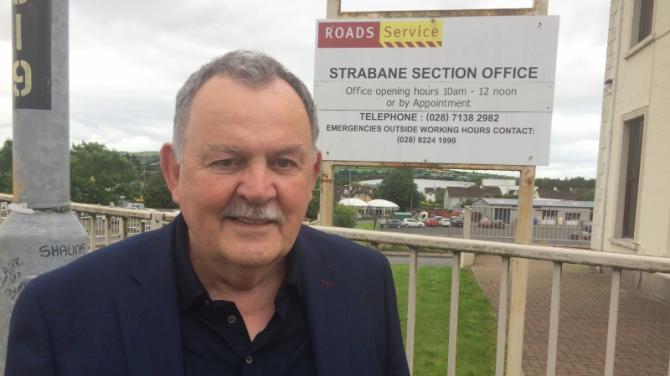 TEN road resurfacing schemes in the Strabane district area are among those in four council areas facing delay and millions being left unspent due to a legal challenge it has emerged.

The list includes schemes in Castlederg, Newtownstewart and Strabane collectively valued at £1.4 million.

Across the entire Derry City and Strabane District Council area, 24 schemes valued at £3,606,000 are facing delay.

In neighbouring Fermanagh and Omagh District Council area, the figure is slightly higher with 29 schemes with a combined cost of £3,735,000.

The figures were disclosed by Infrastructure Minister Nichola Mallon in response to a written Assembly question from Sinn Féin MLA Maolíosa McHugh.

He had asked the Minister to detail what road resurfacing schemes within the two council areas are being delayed due to a current legal challenge; and to detail the costs of the schemes involved.

The road resurfacing works in parts of Northern Ireland have been suspended for several months due to a legal row over the awarding of tendering contracts.

Minister Mallon explained that as a result of legal challenges it was decided to discontinue the procurement competitions for asphalt resurfacing which included the contracts for four council areas in the western division.

"My officials having been working at pace to develop a new procurement strategy and this has now been completed and published," she said.

"It is proposed to tender the work in four phases with six contract areas in each. The first phase is being developed with an intention of going to tender shortly, leading to the award of new contracts in January 2022.

"This first phase includes the majority of the four areas that were impacted by the legal challenge to the previous competition.

"In addition, the first one-off resurfacing contract in one of the affected areas is currently out to tender and a number of other similar one-off contracts are in the pipeline for the coming months."

As well as carrying out works through the resurfacing contracts, the Minister explained that other works such as those associated with the Roads Recovery Fund are largely delivered through other contracts.

"In 2020-21 I allocated £12m of the capital budget to this fund with £10m specifically directed towards rural roads," she said.

"These improvements targeted many short lengths of rural roads that were in particularly poor condition, with over 750 locations on the rural network benefitting from this initiative.

"Following the success of last year’s fund, I set up an enhanced fund in 2021-22 and have allocated £17 million of my capital budget to a Roads Recovery Fund, with £15 million specifically directed towards rural roads, representing a 50 per cent increase in funding in this initiative.

"I hope this provides an assurance that my department is committed to seeking alternative means to deliver much needed investment in our roads network."

Maolíosa McHugh expressed his frustration at the delay, adding that many local roads are already in such a poor state that they cannot wait any longer for the repair work to be carried out..
"It is deeply frustrating that many long awaited and much needed resurfacing schemes in the Strabane area are facing further delay as a result of a legal challenge," the West Tyrone MLA said.

“Schemes in Derry and Strabane, Omagh, Mid Ulster, Newry Mourne and Down are being delayed due to a legal challenge.

“In response to a question I submitted to DfI Minister Nicola Mallon on the issue I have ascertained that these delays are affecting ten schemes in the Strabane area and £1.4m being left unspent."

Pointing out that while the department is developing plans to try and increase spend, Mr McHugh says "priority resurfacing projects in these council areas are likely to have to wait until next year at least for works to commence."

“With resurfacing schemes in areas like Strabane now delayed and with many other of our local roads, and particularly our rural roads, in a very poor state the Minister must prioritise structural maintenance in worst affected areas."