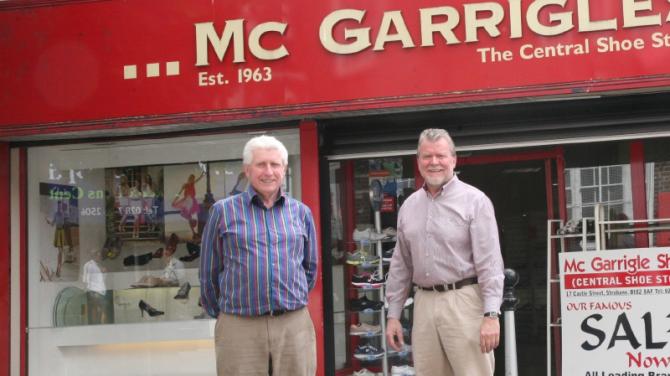 IT'S very much the end of an era for Strabane town centre as one of it's longest established businesses is set to close it's doors in the coming weeks.

For almost 60 years, McGarrigle's Shoes on Castle Street has been providing a range of ladies and gentlemen's quality footwear brands and ever adapting it's offerings to cater to the latest trends and developments.

Regarded locally as a 'one-stop-shop' for footwear needs, the renowned local business was established in 1963 by well-known Strabane businessman, the late Dan McGarrigle and wife, Nancy, and subsequently taken over by his sons, Seamus and Paddy.

Between the pair of them, Seamus and Paddy have over 100 years of experience in the shoe business and 'know it inside out'.

Prior to opening his own store, Dan McGarrigle worked for over 20 years in the footwear department of the former O'Doherty's department store in Upper Main Street.

He was encouraged to go out on his own and started the business 'from scratch'.

The family-run business has been supplying family footwear throughout the North West since.

Throughout its long history, McGarrigle's has faced many challenges not least in surviving the Troubles and the Strabane flood of 1987 but it has remained one of the district's staple retail outlets.

As the brothers are now 'hanging up their boots' and retiring after many years serving Strabane and district, a special closing down sale is taking place to mark the occasion, with all stock priced to go!

Speaking on the imminent retirement, Seamus extended his thanks to the people of Strabane and the surrounding district who have offered their loyal support over the years.

"For many years, the people of Strabane and district have really supported us, and we have customers not only from the town, but from Donemana, Castlederg, Derry and elsewhere.

"I would like to say a massive thank you again to all our customers for their kind words and best wishes over the past few weeks.

Seamus continued: "The business was started in 1963 by my father, Dan McGarrigle, and we are one of the longest established businesses in the town, so it really is the end of an era.

"My brother and I have had a long life in shoe trade. I have 50 years at it, and Paddy has been 60 years at it. It's now coming to the time for us to retire."

With a wealth of experience in the shoe trade, the McGarrigle name has penetrated markets in other towns over the years, as Seamus explained.

"It's a family thing, and over the years we expanded to different towns.

"We were in Derry for a few years, and my sister, now retired, had a shop in Omagh a few years ago.

Seamus added: "We are still open for the last few weeks of our retirement sale.

"All stock must go! On behalf myself and Paddy, we want to thank all of our customers for all the support over the years."