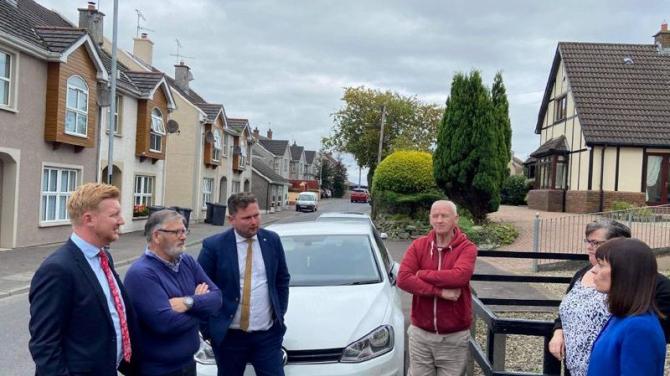 "THIS is a great day for the people of Clady."

Those were the sentiments following the long-awaited news that the Department of Infrastructure (DfI) is moving to implement a HGV weight restriction in Clady, bringing a resolution to a decades long campaign by residents of the border village.

Infrastructure Minister Nichola Mallon announced on Thursday that she has proposed the introduction of an Order which will significantly reduce the number of HGV lorries using the narrow Main Street through Clady.

"For many years the residents in Clady have requested a weight restriction to reduce the number of HGVs using the narrow main street as a through route between the A5 and N15," she said.

"I met with residents and local representatives and I gave them a commitment that I would act to resolve this matter as quickly as possible.

"I am pleased to announce that a weight restriction will be introduced, subject to the successful completion of the legislative procedures, by the end of this year."

HGVs making local deliveries or travelling to and from local businesses will be exempt from the restriction.

For years lorry drivers have been using Clady as a shortcut from the A5 to Donegal and vice-versa, often late at night and this, they say, is posing dangers to villagers and their homes.

Damage has been caused to property in the past and some residents have also had their cars damaged while the village's main thoroughfare has become blocked on occasions.

Residents had been frustrated at the length of time it was taking the consultation process to conclude and had threatened to blockade the road unless immediate progress was made.

The end is now in sight for their long-running campaign.

SDLP MLA., Daniel McCrossan and party colleague, councillor Steven Edwards, welcomed the news which comes on the back of Minister Mallon's visit to the village a few weeks ago.

“This issue has been rumbling on for 30 years and caused a large amount of problems for both residents and local businesses," Mr McCrossan said.

"We have campaigned long and hard for action on this issue and it has consistently fallen on deaf ears.

“When the SDLP’s Nichola Mallon became Infrastructure Minister we approached her and after hearing our pleas she has taken the action required to resolve this issue and deliver for local people.

"She was warmly greeted by people in Clady who are delighted this issue will now be resolved once and for all.”

Councillor Edwards added: “I invited Minister Mallon to Clady earlier this month to see firsthand the impact HGVs are having in the village.

"I was happy that she was able to hear from residents living on the Main Street and learn about the impact this is having on people’s lives.

“Minister Mallon heard how residents have had to move into the back rooms of their homes, how they’ve been disturbed by noise and how their evenings have been continually disrupted.

"I am delighted that she has followed her visit with action by committing to introduce a ban on HGVs in the village.”

In November last year, Derry City and Strabane District Council also lent its support to the people of Clady when they backed a motion tabled by Sinn Féin's Ruairí McHugh on the issue.

His party colleague and West Tyrone MLA., Maolíosa McHugh, has been lobbying on behalf of residents for a decade.

He said he was "absolutely delighted" to learn of the news.

"I am absolutely delighted by this announcement which has come after years and years of lobbying and hard work by the people of Clady," he said.

"I have been supporting residents with this campaign and highlighting their plight for almost ten years and first led a delegation of Clady residents to the Stormont Roads Committee in Hillsborough Castle back in 2014.

"This announcement is a testament to the people of Clady who have tirelessly campaigned for the betterment of their community.

"This is a great day for the people of Clady."