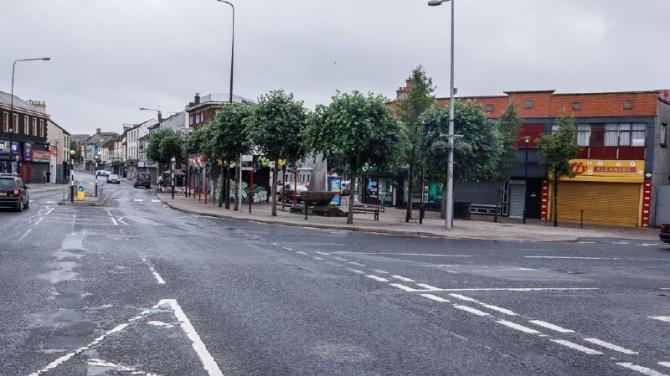 DERRY City and Strabane District Council has confirmed that a business case for a major new public realm scheme for Strabane town centre has been submitted to funding partners, the Department for Communities (DfC), but the delay in its progression is "unacceptable"a local MLA has said.

The ambitious public realm scheme, which has been designed and granted planning permission, will represent the biggest cosmetic shake-up in the town for decades.

The £7m scheme has been devised by Derry City and Strabane District Council (DCSDC) in conjunction with consultants RPS, and will see a number of significant environmental improvements specifically around the area of Abercorn Square, Railway Street, Market Street and Castle Street.

Initiated under the former Strabane District Council, the project will see the replacement of the variety of footpath finishes on Market Street and Abercorn Square with new natural stone paving along with new granite kerbs and the existing street furniture across the public realm area will also be replaced to give a consistent appearance.

The project will also see significant improvements to a number of roads in the town centre and the creation of a new public space in Abercorn Square.

There will be a realignment of the traffic flows and improvements to a number of junctions and parking areas in and around the town centre area with priority given to traffic travelling between Market Street and Railway Street and a new junction for traffic wishing to turn onto the Derry Road.

West Tyrone SDLP MLA., Daniel McCrossan, shared his concerns over the future of the scheme following receipt of an Assembly written question response from the Minister for Communities, Deirdre Hargey, whose department is jointly funding the scheme.

The Minister had been asked for an update on the scheme and "any other revitalisation schemes planned for Strabane town".

"The appraisal will require approval from both my department and the Department of Finance, and the extent of any departmental funding will be considered alongside my other priorities."

Expressing his frustration about the delay in advancing the scheme, Mr McCrossan said planning permission had been granted two years ago.

"Strabane public realm scheme was promised to the people of the area a number of years ago and indeed got planning permission two years ago," he said.

“Despite this, we’ve seen nothing but delays and excuses in terms of delivering it. The scheme has the potential to transform the town centre, giving it a vital uplift while also making it attractive in terms of investment.

“But yet again, we don’t have clarity as to if or when it will be delivered. I am hugely disappointed in this given the promises made by the Sinn Fein Minister for Communities and by Derry City and Strabane District Council.

“The Department and the council need to get their act together.

"Patience among the public and local businesses is wearing thin and this scheme would be an important boost for the local economy given the devastation the pandemic has brought.”

Sinn Féin MLA., Maolíosa McHugh, has also been pressing for the delivery of the scheme.

"Over the summer I contacted the Department for Communities for an update on the Strabane public realm scheme," he said. "My understanding is that the business case is now with the department for appraisal which is another positive step forward

"It's positive to see the Minister state that the delivery of this scheme is one of her department's key regeneration schemes.

"I will continue to press the department and council to deliver this much needed scheme for Strabane."

Asked for an update on the scheme, a spokesperson for council confirmed that it has submitted a business case to the DfC the scheme.

She added that council "will continue to work with all partners to progress plans for the delivery of the scheme as soon as possible."