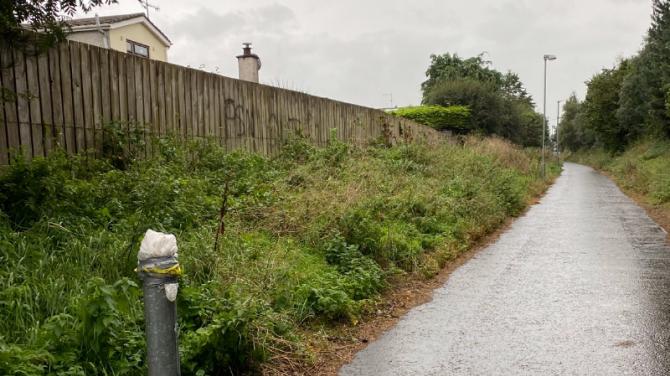 LIGHTS along a walkway in Strabane popular with walkers, cyclists and runners have yet to be repaired four months on from the outages.

The street lamps on the area linking Bradley Way to the Urney Road have been out since May this year when they were damaged during a storm.

Paul Boggs, an independent member of the Derry and Strabane Policing and Community Safety Partnership (PCSP), has been lobbying for remedial action.

He says he has now received a commitment from the Department for Infrastructure (DfI) that an inspection will be completed in a "number of weeks", however the length of time it's taking to address the matter is deeply concerning he added.

“Having worked on this issue for some months following damage to lights in a storm in May 2021, I am delighted to receive confirmation that an inspection of the walkway for missing lamps will be carried out and that work to rectify issues will be completed within a number of weeks," Mr Boggs commented.

“The lack of lighting on this footpath has made it a safety hazard for walkway users, especially in the dark evenings approaching into the winter months.

"This is a particularly dark footpath when lights are not working and I am delighted that in order to increase safety, the local DfI department have agreed to carry out the necessary work to fix the issues raised by walkway users.”

"It is not acceptable for the users of this walkway to wait as long as they have for the issue to be dealt with.

“People feeling safe when out and about in their own communities is a priority for me in my role within the local PCSP and I therefore strongly welcome these commitments by DfI.

"I will be sure to follow up on these issues if they aren’t resolved in a timely manner.”