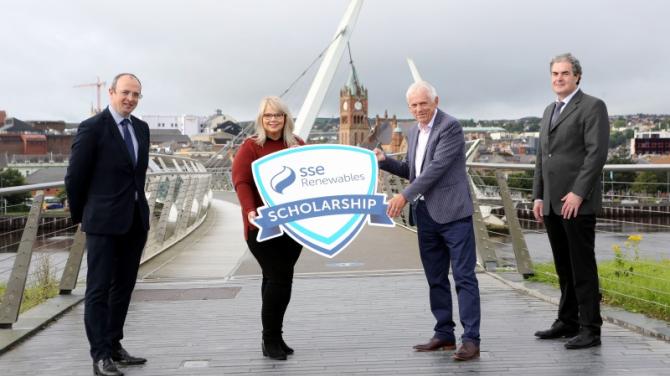 SSE Renewables has launched its 2021 Scholarship Fund, which will support students across counties Tyrone, Derry-Londonderry, Fermanagh and Donegal as they begin their third level studies.

This is the eighth year of the scholarship, which provides qualifying students with funding support for 50 per cent of their third level education fees.

SSE Renewables is responsible for operating the Regional Fund and Scholarship for all three wind farms.

Scholarships are provided for students living in Counties Tyrone, Derry-Londonderry and Fermanagh, which are the host counties for the wind farms in Northern Ireland as well as students who live in County Donegal, which adjoins SSE Renewables’ Tievenameenta Wind Farm.

Since launching in 2014 the SSE Renewables Scholarship Fund has supported over 260 students with more than £850,000 in financial support as they commence new courses at the partner university and colleges.

SSE Renewables is the leading developer and operator of renewable energy in Northern Ireland and is the power behind leading greener energy provider and sister company SSE Airtricity.

Over the last two decades SSE Renewables has invested over £500m in the Northern Ireland economy through renewable energy developments. The company owns 121.5MW of operational onshore wind farms in locations across NI.

These include the region’s largest wind farm, the 73MW Slieve Kirk Wind Park which overlooks the City of Derry.

This year marks a change in the name of the funding programme. Previously promoted under the SSE Airtricity brand, the programme will now be known as the SSE Renewables Scholarship Fund.

The change is designed to better link annual funding award payments from SSE’s wind farms in Northern Ireland to SSE Renewables, which owns and operates each of the company’s wind farm sites.

Speaking at the launch of the 2021 SSE Renewables Scholarship Fund, Michelle Donnelly, SSE Renewables community investment manager, said: “At SSE Renewables we want to ensure that all our work has a long term and positive impact, whether it be in the clean, green energy we produce in the wind farms we develop and operate or in the support we can give back to the local community.

"And through the SSE Renewables Scholarship Fund we are proud to be able to help so many students as they begin their academic journey that will set them off on long, successful careers.

“The demand for the Scholarship Fund has grown each year, particularly for those who are studying renewable energy. Financial support is particularly important for students, as it allows them one less thing to worry about so they can concentrate on their studies, and we have been able to develop excellent working relationships with Ulster University, South West College and North West Regional College to ensure that the Scholarship Fund is bringing real benefits to students.

“The 2021 SSE Renewables Scholarship Fund is now open for applications and we hope that many new students will apply.”

Applications to the SSE Renewables Scholarship Fund are now being accepted with completed applications to be submitted by candidate students to their chosen institution no later than Friday, October 29.

For more information including further details on how to apply, visit sserenewables.com/scholarshipfunds