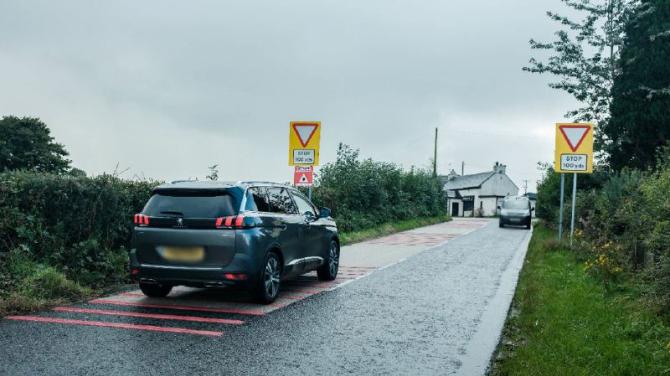 FURTHER interim safety measures have been installed at a notorious accident blackspot in the Glebe area - dubbed 'the most dangerous junction in Ireland'.

For several years now the Bellspark Road and its junction with the Orchard Road has been the scene of numerous accidents and near misses.

Local politicians have been raising the issue of the junction for years, warning that recent incidents are a stark reminder of the need for a scheme to be brought forward before there is a major tragedy.

The Department of Infrastructure (DfI) says it intends to redesign the crossroads to a "staggered junction", with the acquisition an demolition of the Prospect Bar key to this.

“As an interim safety measure the department has installed rumble strips on both approaches to the junction on the Orchard Road and will also be refreshing the white lining and road markings when weather permits," a DfI spokesperson said.

The dangers of the junction were highlighted in the Assembly recently by West Tyrone Sinn Féin MLA., Maolíosa McHugh, who called on Roads Minister Nichola Mallon to "immediately implement safety measures" including accident black spot signs and the rumble bars on the road.

He told the Assembly: "It is possibly the most dangerous junction in Ireland. Since 2011, I have highlighted the dangers of the junction.

"Whilst measures such as improved signage and site clearances have been implemented, accidents continued to happen and, because of their frequency, the junction has moved up the Roads Service's list of priorities for a major works programme."

Referring to three recent accidents "in exactly the same circumstances all within one week", he continued: "That has to stop. Thanks be to God that no one has lost their life, but I am sure that immeasurable damage has been done to vehicles and human beings at that junction. It has to stop."

Mr McHugh has now welcomed the latest action, but says the permanent work must advance.

"This is only an interim safety measure until the permanent re-alignment work gets underway and I will continue to lobby the Minister to ensure this happens as soon as possible," he said.

"Thanks to the local DfI office for ensuring the concerns of locals are taken on board."

"This was a proposal councillor Steven Edwards and I brought to DfI a number of months ago as an added safety measure. We are happy that DfI has taken this on board and have now installed these strips," he commented.

"We do believe that these rumble strips will help make drivers more aware of the junction and will hopefully go some way in terms of preventing collisions in the immediate future.

"Massive thanks has to go to our local DfI team for auctioning this, to the head of DfI Western Division and Minister Mallon for their engagement on the issue.

"The SDLP are continuing to work with DfI and landowners over the future scheme to have a staggered junction constructed at this site."