Luke named 'Apprentice of the Year' 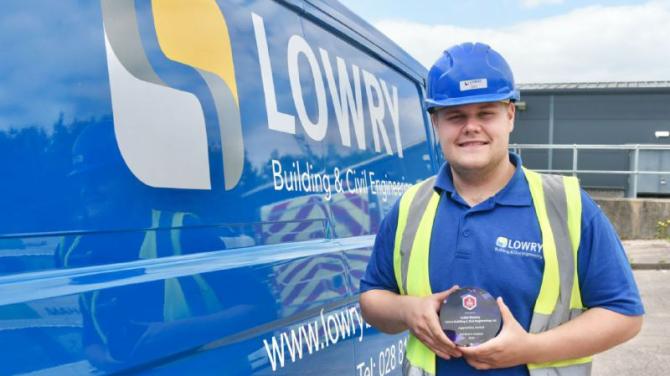 CASTLEDERG man, Luke Emery, who is an apprentice at Lowry Building & Civil Engineering Ltd, has been named 'Apprentice of the Year' at this year's Federation of Master Builders’ National Master Builder Awards, and was recognised for “going the extra mile” for his team and customers.

TV presenter and all-round building enthusiast Nick Knowles announced the winners to the delight of the Luke, his family, and the Lowry Building and Civil Engineering team, during the virtual ceremony held on September 24.

The awards recognise building excellence, quality craftsmanship and exceptional customer service, and are run by the Federation of Master Builders, the largest trade association in the UK construction sector which is this year celebrating its 80th anniversary.

A joinery apprentice, Luke’s successful nomination and victory in this hotly contested category has been attributed to his eagerness to learn new skills and his commitment to his employer, as well as his natural aptitude and growing skill level in his chosen trade.

Luke’s commitment to the role shone through during the COVID-19 pandemic, with him joining the firm’s essential workforce to contribute to vital maintenance for clients, such as Northern Ireland Water.

Also highly praised for his interpersonal skills, Luke has been seen to work extremely well with other members of the Co Tyrone-based team, and communicate clearly and effectively with the company’s clients.

It was recognised that, alongside these skills, Luke also works well independently, understanding the importance of client satisfaction and using his initiative to deliver first class joinery works.

Reacting to his win, Luke said: “I’m delighted; it’s crazy! I have loved the variety of an apprenticeship, getting out and about on site.

"I would like to thank everyone at the team at Lowry Building and Civil Engineering who has welcomed me and continues to accommodate me.

"It’s a good environment to work in. I’d like to thank my mentor, Tommy, in particular.”

Clive Betts MP, chair of the Housing, Communities and Local Government Select Committee, and a national judge for the category, said: “Looking at the commitment that Luke put in to gaining the range of qualifications in such a short period of time demonstrates his enthusiasm for the job he’s undertaking.”

Lee Jones, deputy editor at Professional Builder, and also a National Judge added: “To stand out in a field of very strong candidates was itself telling.

“Luke was a very well-rounded individual. He had determination, he had teamwork, he had communication.

"He also clearly had a lot of ambition, willing to progress and build on the skills and talent he has.”