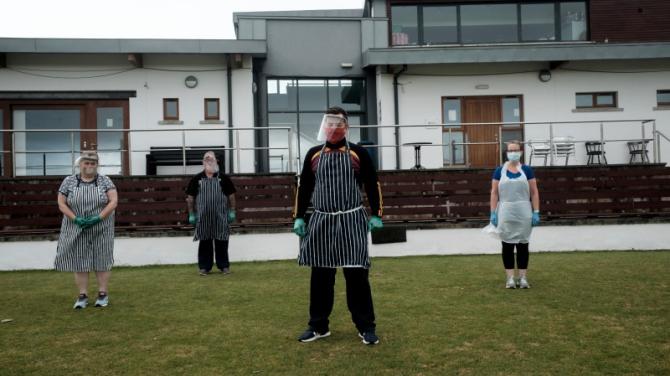 BREADY Cricket Club is hoping that its success on the field will be matched with its team of volunteers - the 'cricketing cooks' - lifting the title of 'National Lottery Project of the Year'.

The Magheramason-based club is one of two entries from the North West who are in the running for the accolade.

Alongside Bready, Remake, Replay, a creative media programme to connect young people to heritage run by the Nerve Centre beat off stiff competition from more than 1,500 entries to reach the public voting stage.

They are among 17 shortlisted finalists from across the UK, who have been competing in four-week public vote to be named the inaugural winners, with the recipient set to land a £3,000 cash prize for their project and an iconic National Lottery Awards trophy.

Bready Cricket Club has been nominated for its work during the pandemic.

When COVID-19 stopped play, club members and volunteers stepped up serving up more than 4,500 lunches and activities within their local community.

Every Sunday, around 130 piping hot meals and tasty desserts were delivered to the doors of residents in Bready, Magheramason, Cullion and surrounding areas by the volunteers who became known as the 'cricketing cooks'.

Voting has been open from earlier this month and will close at 5pm Monday, October 4.

Speaking as the voting lines prepare to close, club committee member, Trevor Hamilton, urged the public to get behind them.

“We are delighted to be in the running for National Lottery Project of the Year," he said.

"Like so many other clubs, we faced unprecedented challenges over the last 18 months.

"But our members and volunteers showed incredible resilience and made sure we looked after those most in need in our community.

“Our cricketing cooks served up thousands of portions in Sunday lunches and we found additional ways to reach out to people and reduce their social isolation by holding socially distanced keep fit, bingo and other activities.

“We have had a great year on the field with our first eleven lifting the premiership title, it would be great to match this success off the field by winning a National Lottery Awards trophy.”

Jonathan Tuchner, from the National Lottery, added: “In these challenging times that we still find ourselves in, we see so many examples of inspirational work throughout our communities, driven by these very projects.

"It’s thanks to National Lottery players, who raise more than £30 million each week for good causes, that brilliant projects like these, are possible.

“These projects are doing some incredible work in their local community and they both thoroughly deserve to be in the finals of the National Lottery Awards Project of the Year 2021.

"With your support, they could be a winner.”

To vote for the Bready project, go to lotterygoodcauses.org.uk/awards.