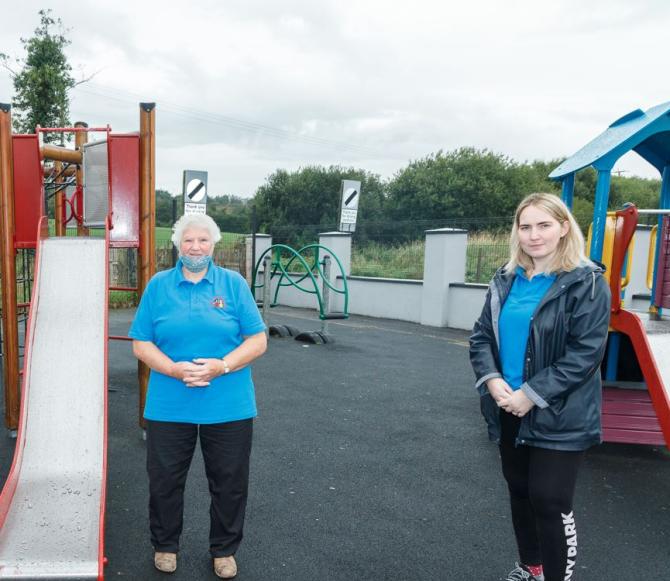 A COMMUNITY group in Sion Mills has vowed to oppose the closure of a children's play park in the village and are urging local residents to get behind their efforts to save it.
Derry City and Strabane District Council has published a draft strategy on play provision across the district, which it says follows extensive community engagement with local children, parents and groups.
The Play Plan document is led by consultants at Playboard NI and is a 15-year strategy aimed at delivering on key provision facilities across the council area.
It contains an analysis of current provision for each of the eight Local Growth Areas (LGA) and a series of recommendations for future provision.
Contained within the document for the Derg DEA is a recommendation that consideration be given to the removal/site transformation of the play park which is adjacent to Sion Mills Community Association's hall at Garden Road, following local consultation.
The document says this is based on "a combination of low play value and indicative low level of population demand".
If given the green light, it would see the removal of play equipment with the space maintained as a community green space.
The proposal has sparked an angry reaction from villagers with the local Association saying it is "astounded" by the recommendation.
It says the park, which has served local children for over 20 years, should not be removed but upgraded.
Long-standing member, Georgina McClintock, said: "In January 1993, Sion Mills Community Association was formed at a public meeting held in the primary school to work with Northern Ireland Housing Executive on the largest project ever done outside Belfast.

"New streets, new street lights - each street house a garden at the back of their house, but our group saw the big need in our village. Children were playing on the streets. No play park.
"So, we through the National Lottery provided a public play park opened by the late Ivan Barr. This play park has seen thousands of children use it and indeed out of the blue the Derry City and Strabane District Council has put out for consultation to close our park as council have built a lovely new park in Parkside.
"When plans for this park were in local papers no one said our park was to close. Indeed for the past 25 plus years, our community provided a safe environment for the children in the centre of our village.
"Surely we have lost enough in our village - our doctors surgery, our library, our police station and now this."
Georgina is urging all residents to have their say and fight to keep the play park in situ.
"To the mums and dads, we put it to you to help fight this by letting council know if you want this park to stay open and indeed be considered for an upgrade."
Another member, Salome Preston, added: "We at the Community Association and I as a parent myself, are astounded that a vital play park in the village is being considered for removal/transformation to a green space.
"This is a very popular play park which is central to residents in the village and is used on a daily basis and in all weathers.
"We really hope that we can encourage members of the public to oppose this decision by filling in the online consultation survey because without that we may lose our play park and we believe that this cannot happen."
For its part, council says the draft strategy is a "working document" and have urged people to give their feedback by visiting: www.derrystrabane.
com/playplan
The consultation is now live and runs until December 8.