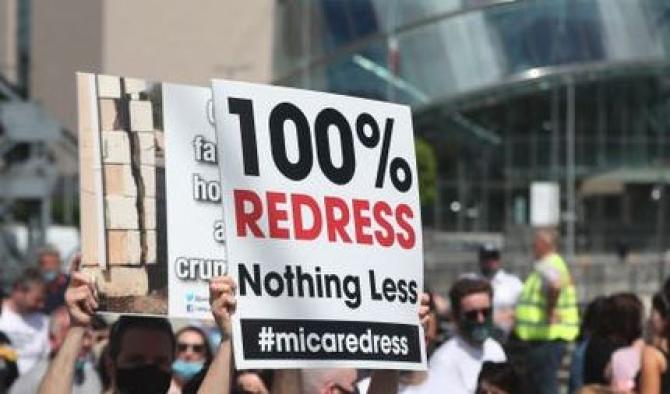 A MAJOR demonstration calling for a 100 per cent redress scheme for homeowners affected by the Mica scandal is being held in Lifford this weekend.

The event, organised in conjunction with Donegal Mica Protest Action Group, is beginning in The Diamond area outside the council offices headquarters.

Families will speak of their experiences at the event while Mica campaigner, Paddy Diver, will be the main speaker.

Thousands of homes and buildings - mainly in counties Donegal and Mayo - have been damaged because of blocks containing high levels of the mineral Mica.

It absorbs water, which can cause walls to crack and begin to crumble.

Late last year, the Defective Concrete Blocks Grant Scheme was introduced which covers 90 per cent of rebuild costs, leaving homeowners to cover the remaining ten per cent of costs.

Homeowners, however, argue that the scheme is inadequate and say that they could pay more than €100,000 for repair work.

Organisers are urging a large attendance to show solidarity with the impacted families.

Outlining plans ahead of Saturday's event, a spokesperson said: "We ask people attending the protest on Saturday to assemble at the Diamond area of Lifford outside the County House headquarters at 1.30pm.

"At 2pm sharp the protest march will proceed from The Diamond turning right up Lifford Main Street to the bottom of Croghan Heights in the open green area, where the stage shall be set up.

"At approximately 2.30pm the speeches will commence with Paddy Diver being main speaker on the day. When the speeches are over, the crowd will reassemble to continue the march down the main road towards the roundabout turning left before Lifford bridge back towards The Diamond."

Free car parking will be available at the Lifford GAA grounds, the dog track and old bakery.

"We urge everyone to come out and show their support for Mica affected homeowners. Strength in numbers and people power will see this over the line.

"Posters and masks will be available but we urge anyone who has any from previous protests to bring them along on the day," the spokesperson added.