District shows its support for Tyrone 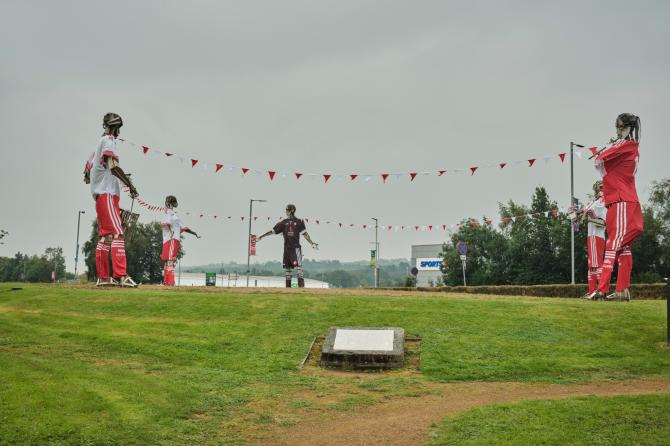 ALL Ireland fever has gripped the county as the countdown is on to this weekend's All Ireland final.
Tyrone's senior men, which includes local lads Cathal McShane from Glenmornan and Aghyaran's Ronan McNamee, are gearing up to face Mayo on Saturday.
All roads will lead to Croke Park as the team led by joint managers Feargal Logan and Aughabrack's own Brian Dooher, bid to bring the Sam Maguire Cup home.
As excitement mounts ahead of the big day, towns and villages across the district are awash with the red and white of Tyrone in a show of support for the Red Hands.
Many homes, businesses and public houses have also decorated their premises with bunting, flags and messages of support proudly on display.
Elsewhere, Strabane’s iconic millennium sculptures - 'the Tinnies' - have also been clad in the county colours by the local Sigersons club.
The tradition of dressing the huge steel structures began back in 2003, and was subsequently repeated in 2005 and 2008 when the Tyrone team reached the final.
Each of the five structures have been kitted out much to the delight of local fans who have been happily posing for photographs ahead of the big day.
Mayor of Derry City and Strabane District Council, Alderman Graham Warke, has also sent a special good luck message to the Tyrone team and supporters.
"I would like to wish Brian Dooher, Feargal Logan and all the players and backroom staff and their army of supporters the best of luck as they bid to bring home Sam Maguire," he said.
"An All Ireland final is an event for everyone to savour and it is clear from being out and about in the district this week that the excitement and atmosphere is building ahead of the game.
"I hope everyone has a day to remember and I look forward to the prospect of welcoming the team back to the district next week as All Ireland Champions."
Tyrone defeated a hotly fancied Kerry side to book their place in the final as two goals from Conor McKenna and one from Cathal McShane helped the Red Hands over the line in a 3-14 to 0-22 win.
Saturday's final has a throw-in time of 5pm and it will be broadcast live on RTÉ 2 and Sky Sports.
The game will be watched by 41,150 supporters which is 50 per cent of the stadium capacity, and with just days left, the scramble for the tickets is ongoing.
With Tyrone clubs having received around 8,000 tickets, demand is outstripping supply meaning many loyal supporters face missing out on attending the final.