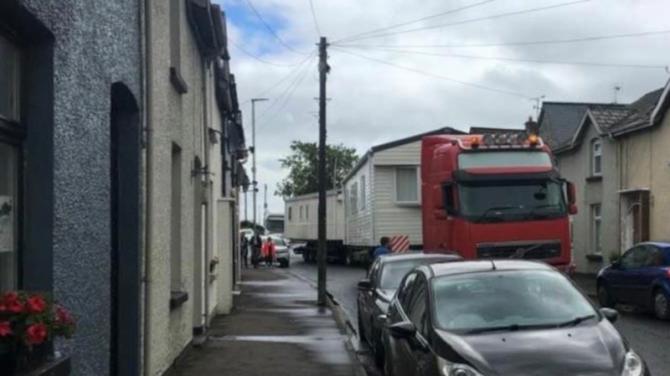 A REQUEST has been made to the Infrastructure Minister to visit the village of Clady to see the need to resolve a long-standing issue over Heavy Goods Vehicles (HGVs) traversing through.

A consultation into a proposal to restrict lorries from passing through the border village has now concluded.

The Department of Infrastructure (DfI) is planning to introduce a weight restriction which would prohibit vehicles exceeding 7.5 tonnes from travelling through unless for access.

A similar process in 2019 attracted a number of objections from local businesses who said they would be adversely affected by the weight restriction.

The department says the exemption contained within the new legislation is intended to reduce this impact.

Under the current proposal there will be exceptions for vehicles from the weight restriction operating from within in the immediate rural catchment and for vehicles delivering or collecting from properties.

The scheme could be introduced later this year, depending on the outcome of the consultation with one local MLA saying the "end is in sight".

West Tyrone SDLP MLA., Daniel McCrossan, says it is a massively important issue for local people and he has invited his party colleague and DfI Minister, Nichola Mallon, to visit Clady to see this first-hand.

"The issue of HGVs using Clady is massively Important to local people and it is an issue the SDLP are fully committed to resolving," he said.

"Following a range of engagement with Minister Mallon and the Department of Infrastructure over recent months, we are pleased that the consultation for restrictions has advanced and that we now have the end in sight.

“The people of Clady have been tormented by constant lorries travelling through a small village that is not designed for them. Older people have been awoken late at night and residents on the Main Street have moved to back bedrooms due to the noise disruption."

It's been a long-running campaign for the people of Clady with the proposal for a lorry ban brought before a Stormont committee as far back as 2014.

An increasing number of lorry drivers using Clady as a shortcut from the A5 to Donegal and vice-versa, are posing dangers to villagers and homes, say local people who have been frustrated at the delay in implementing the restrictions.

Damage has been caused to property in the past and some residents have had their cars damaged while the village's main thoroughfare has become blocked on occasions.

Mr McCrossan continued: "Last year, Minister Mallon met with community groups online to hear first-hand how HGV’s using the village are impacting people. I’ve now invited her to see for herself the impact this is having and to listen to the serious concerns of local residents.

“The Minister has done a lot to progress the issue and has recently concluded a consultation.

"I will be continuing to engage with her and her Department to ensure that a HGV restriction for Clady is brought as soon as possible.”