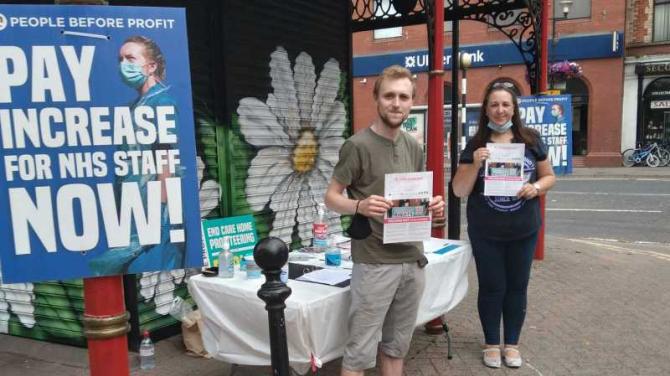 A PETITION has been launched in Strabane calling for fairer pay rise for healthcare workers.

A spokesperson said: "Three per-cent is a pay cut in real terms as it is below the current rate of inflation of nearly four per-cent.

"People Before Profit support the demands of health workers and their unions for a proper and fair pay rise. These workers have risked everything to save millions of lives in the last 18 months whilst working in an already under resourced health service and balancing the demands of their personal lives.

"The physical and extreme mental stress of working at the frontline has taken a heavy toll on NHS staff with genuine fears of burnout and that a mass exodus of staff is imminent."

The spokesperson continued: "In contrast, trillions of pounds have been spent on immediate bail outs for private businesses, including £40bn misspent on a failed track and trace system by the Tory government, and the wealth of billionaires has increased by nearly 22 per-cent in the last year to nearly £600 billion.

"We call for these wealthy elites to be taxed to pay for a fully funded NHS and a fair pay offer for its workers.

"This measly offer is a complete insult to all frontline workers. These NHS workers who are playing a critical role in the COVID-19 pandemic have been let down by establishment parties at Westminster and Stormont.

"If the same politicians, who last year were (rightly) heaping praise, thanks and clapping these workers, can now treat them with this level of contempt, then the future of all public sector workers is not looking very good.

"These workers will continue to leave the sector or move elsewhere and the impact upon the NHS will be disastrous."

The petition was signed and warmly welcomed by many, including former and current NHS workers, and the campaign will continue with stalls across the rest of Tyrone in the next few weeks.