Reports of anti-social behaviour at cemetery 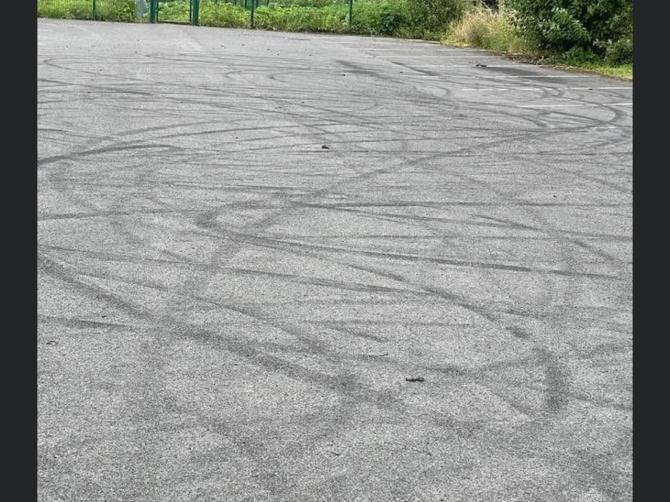 Tyre tracks in the car park at Mountcastle Cemetery, outside Donemana.

ANGER has been expressed over an escalation in anti-social behaviour at a cemetery in Donemana.

Earlier this year it was reported that thieves had stolen items, including floral arrangements, from graves in Mountcastle Cemetery over the Christmas period.

It has since emerged that the car park to the cemetery - which is located on Duncastle Road around three miles outside the village - has become a target for anti-social driving.

Local residents have reported that young drivers are performing ‘donuts’, with tyre marks and the remnants of burnt rubber visible on the gravel surface.

Sperrin DUP councillor, Alderman Devenney, described the behaviour as "sickening" and has called for those responsible to reflect on the anguish their actions are causing to grieving families.

"This is totally unacceptable," he told the Strabane Weekly News. "Those responsible for this type of activity need to stop.

"Cemeteries are very sensitive areas where people come to visit the graves of their loved ones and pay their respects.

"The last thing they need to see when they come to the cemetery is the outworkings of this type of activity that is now going on. It's disgraceful."

Alderman Devenney said he has been contacted by constituents who are deeply hurt.

"It is sickening for those who have loved ones buried there," he continued. "I do know that this has also been happening in a number of other cemeteries across the council area as well.

"I'm aware of the same issue in Ardstraw which my colleague, Keith Kerrigan, was dealing with. I have spoken to council regarding these issues and some of the public are calling for gates to be put on these car parks.

"But that brings problems then in terms of access for families as well as the opening and closing of them (the gates).

"Gating car parks is not ideal for a cemetery nor is CCTV and in today's society we should not even have to be considering that."

The local councillor said that despite pleas in the past items on graves are still being interfered with.

"There have been ongoing issues with this cemetery with items being damaged and taken from graves. That is also happening again," he said.

"During the discussions about the car park issue, it's been brought to my attention that graves have been disturbed, ornaments have been lifted and strewn across grass.

"And, once again, some of the ornaments have been removed from the graves, which is another sad reflection on society."

As chair of the local Policing and Community Safety Partnership (PCSP), Alderman Devenney said he will be bringing the issue onto the agenda at the next meeting of the policing body.

He has also brought the matter to the attention of council with the local authority’s Cemetery Team expected to monitor the area.

"It's sad that an issue has to be raised like this because of idiots who are carrying out this type of activity in our cemeteries," he continued.

"Anyone removing objects from any grave, they need to have a stern look at themselves.

"They need to reflect on the pain and hurt that they are causing to loved ones who are coming to visit the cemetery..

"Families are totally disgusted that once again the cemetery has been targeted by vandals and drivers doing these ‘donuts’. This behaviour should not be going on and I totally condemn it.

"I would urge anyone who has witnessed any of this reckless behaviour or who has information to pass it on to myself or to police.

"I would also ask that people report any suspicious behaviour in the area or anything that they think is unusual."

A spokesperson for Derry City and Strabane District Council said that it is aware of a number of incidents of anti-social behaviour in recent months at the cemetery.

"Council has been monitoring the issue and working with the PSNI regarding security in the area," the spokesperson confirmed.

"We would like to take this opportunity to remind people that this kind of anti-social behaviour causes great distress to families who have lost loved ones and we would appeal to the public to be respectful when visiting all cemetery sites.

"Anyone engaging in vandalism or other criminal behaviour will face prosecution."