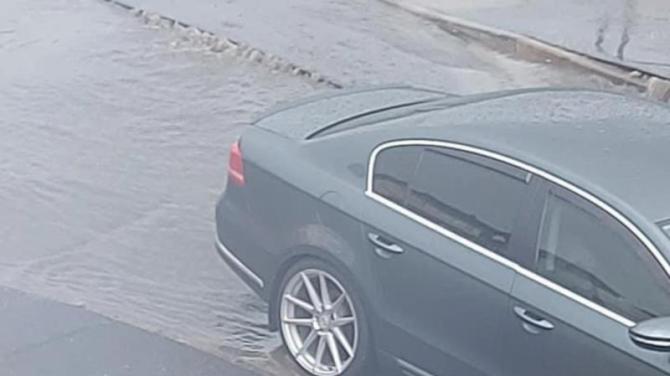 THE ongoing threat of further flooding to homes in the Ballycolman Estate was highlighted once again at the weekend.

Torrential downpours and thunderstorms on Sunday resulted in flash flooding across the district, with many roads impassable for a period.

Residents in the Ballycolman Estate and Pearse Gardens faced an anxious wait again as the heavy rainfall caused storm drains to overflow, but thankfully the water did not breach properties.

Scores of homes in the area have been badly damaged as a result of flooding in recent years, and there have been pleas from residents for urgent action to permanently address the situation, which has been an ongoing issue for 50 years.

Sinn Féin MLA Maolíosa McHugh has once again called on the Minister for Infrastructure Nichola Mallon to address the recurrent flooding issues within the estate and Pearse Gardens.

He said the current infrastructure is not fit for purpose and that Sunday was another 'groundhog day' for residents within this area given the weather which caused much destruction across the town.

"The afternoon of Sunday, July 4, will be remembered for a long time in Strabane given the shocking consequences of the stormy weather," the West Tyrone MLA said.

"As Strabane was coming to terms with the devastating loss of the O’Doherty family business on Railway Road, residents of the lower Ballycolman and Pearse Gardens again watched with fear and waited on the consequences of the extremely heavy rain.

“Thankfully, this time there was no damage to homes, but it again flags up the serious issue of the lack of capacity in the storm drainage system to deal with the type of weather event that occurred on Sunday."

Mr McHugh said that since the flooding events last summer, he has had to contact both the Department for Infrastructure (DfI) and NI Water on numerous occasions to find a resolution and address this reoccurring problem.

"DfI Roads gave a commitment to undertake studies on possible flood alleviation measures to eliminate or reduce the risk to properties, but no further progress has been made," he said.

"I have again been in contact with the relevant agencies and have urged the Minister to move into action mode as the time for talking is over.”

Earlier this year, DfI confirmed that a report outlining potential flood alleviation measures for the Ballycolman Estate had been completed submitted to department officials for consideration.