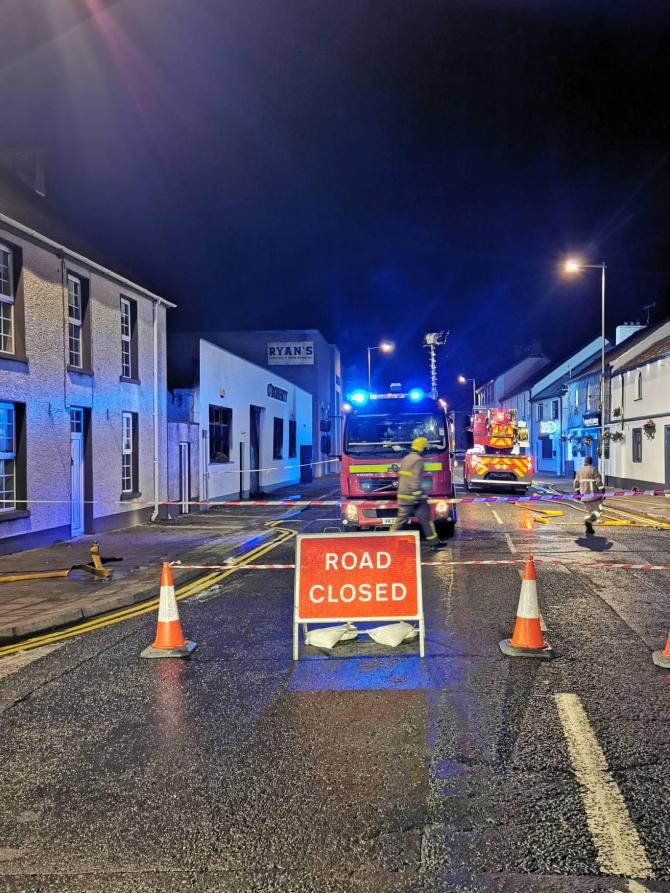 The Fire Service at the scene of the major blaze on Railway Street, Strabane.

THE Railway Road in Strabane will remain closed for the majority of today following a major blaze at a coffin makers in the town.

Eighty firefighters, ten fire engines and four special appliances battled the blaze at O'Doherty's which broke out around 4pm on Sunday, following a lightning strike.

The operation is continuing today with police saying the road will remain closed.

A spokesperson for the Northern Ireland Fire and Rescue Service (NIFRS) said: "One fire appliance is currently in attendance at a fire at a commercial premises on Railway Street, Strabane.

"It is expected that firefighters will be in attendance for the next number of hours. The road remains closed at present. We were called to the incident at 4.10pm on Sunday, July 4.

"At the height of the incident ten fire appliances including four specialist vehicles, and approximately 80 Firefighters were in attendance.

"Firefighters wore breathing apparatus and used jets and aerial appliances to tackle the fire. The cause of the fire is under investigation.”

Police are advising motorists to avoid the area.

"Following the fire on Sunday afternoon, Railway Street will remain closed for the majority of today (Monday)," a spokesperson said.

"Please avoid the area if at all possible. Delays are expected in the general area."

The businesses has been a mainstay in the town for over 100 years.

Local councillor Michaela Boyle said the thoughts of the entire community are with the O'Doherty family.

"Our thoughts and prayers today are with the extended O'Doherty family and their employees as they come to terms with the loss of of their business.

"Massive credit to the many firefighters that worked hard to avoid other close by buildings igniting.

"We will always be grateful to them, for putting their lives at risk to save others."