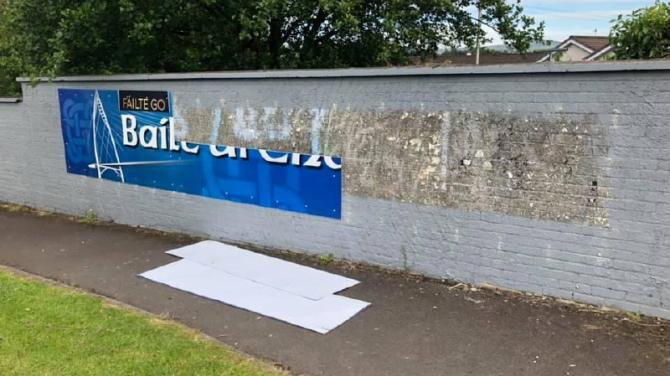 A NEW billboard erected to mark 50 years of Ballycolman Estate in Strabane has been ripped down by vandals.

The colourful and eye-catching signage, which was erected last month, was first conceived of when Sinn Féin party activists cleaned graffiti off walls in the estate.

The 24ft by 4t billboard is accompanied by the wording ‘Fiche Bliain ag Fás (50 Years a Growing)’ and is a celebration of the strong sense of community and community spirit that has that has been defining feature of the estate.

However the signage has since been ripped down with Strabane Sinn Féin describing the incident at the weekend as a "pathetic mindless act of hooliganism".

A statement from the party read: "About five weeks ago activists from the Jim McGinn Cumann undertook a body of work where they repainted a number of walls in the Ballycoman Estate that were covered in graffiti.

"To mark the 50th anniversary of the Ballycolman, the work culminated in the erection of a large billboard welcoming people into the estate.

"Sadly a person, or people unknown, decided to rip down the boards. This shocking anti-community activity has angered many residents who see it for what it is.

"A pathetic mindless act of hooliganism that in no way reflects the strong community ethos that runs through the Ballycolman.

"What they hoped to achieve by such actions is beyond us, however, it will not deter all those who are working on a daily basis to bring positive change to our communities."

"Absolutely disgusted at this," she said. "Those involved in this destruction bring nothing to the community of Ballycolman.