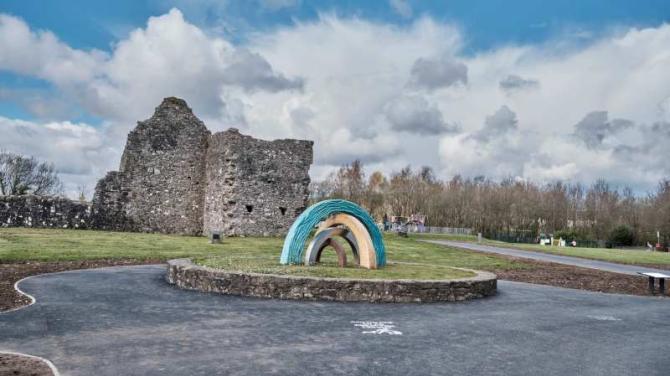 A MULTI-million pound bid for government funding to finance a number of projects in Castlederg has the potential to be transformative for the area.

That's the view of local elected representatives this week as Derry City and Strabane District Council confirmed it intends to apply for £6.4m from the Levelling Up Fund for the 'Derg Active' project.

Announced by the UK government earlier this year, the £4.8 billion fund aims to invest in infrastructure to support town centre and high street regeneration, local transport projects and cultural and heritage assets.

If successful, the council-led project will see the development of a 4G pitch at Mitchell Park, further enhancements to the Castle Park site and improvements to The Diamond area. It is one of several applications being submitted by the local authority to the fund.

Yesterday (Tuesday), a spokesperson for council confirmed that "council is developing a series of projects for submission under the Levelling Up and Future Fund programmes.

"From the very start of the new council, combining Strabane and Londonderry, I have been highlighting that beyond the city and Strabane town, our rural settlements including among many others, Castlederg, Newtownstewart, Sion Mills, have continued to fall behind in the provision of services and facilities compared to investment going to the urban areas of Londonderry and Strabane town," he said.

"I was pleased to receive support for a motion in council urging action to address the lack of rural provision and that all Derg councillors continue to support this position.

"Indeed, it has been rewarding to find other such moves coming forward from Derg colleagues emphasising this and other issues."

Alderman Hussey continued: "If successful, funding will see a full-size 4G football pitch at Mitchell Park being set on a raised platform because of the flooding issue on this site, together with upgraded changing facilities, walkways, exercise areas, seating etc.

"Whilst much work has already been carried out within our local Castle Park, proposals to enhance the park and improve its attraction to all our citizens and visitors are included.

"I would hope that our marvellous Castle Park can be upgraded to a Neighbourhood or District Park if the funding application is successful.

"Plans to regenerate The Diamond in Castlederg Centre will further improve the aesthetic and social appeal of our town centre to all.

"Also, at the Upper Strabane Road entrance to Young Crescent there are plans upgrade two small green areas on either side of the road creating a small parklet with seating and planting etc.

"Let us hope that we will witness the beginning of the blight and lack of services and facilities to our wider rural community being addressed and that, utilising any additional funding available, those many other locations through our Derg area will also experience proper development going forward."

The details of the project were discussed with councillors and officials during a meeting on Friday where it was confirmed council will be submitting the £6.4 million application to source finance for the project.

Sinn Féin councillor, Ruairí McHugh, who recently brought a motion before council calling for a refocus to be brought on the process to regenerate the town, also welcomed the news.

The development of the new floodlit 4G pitch will have the capacity to cater for IFA soccer and junior GAA similar to Melvin Park in Strabane, he said, while the Castle Park will see improvements to the site for outdoor entertainment events.

“This project would build massively on other positive developments in the town in recent times not least the £293,000 PEACE IV funded Shared Spaces Project between St Eugene’s GAC and Dergview FC and the £183,000 Rural Villages Project," he continued.

“We will now all be working collectively to ensure that the most comprehensive application possible is submitted and to do our outmost to deliver this transformative project for the town and wider area."

“The Derg Active scheme would see significant investment going into the heart of Castlederg which has been neglected for far too long," Mr McCrossan said.

"It would be transformational in terms of sport and outdoor recreation in the area.

“The SDLP have constantly called for additional investment in outdoor recreation and sport across the Derg DEA and will continue to lobby council and the British government to ensure this scheme is realised.”

Councillor Edwards added: "This is hugely welcomed news and will massively benefit the future generations of children and young people in Castlederg.

“Since coming to council it has been clear that Castlederg has suffered from a decade of neglect. This funding will go some way in reversing that.